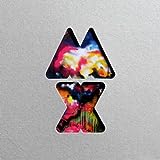 Coldplay’s latest album Mylo Xyloto is available on Amazon in MP3 format for only $4.99

If you’re a Coldplay fan, this is a very nice deal.  To grab this $4.99 Coldplay album click here 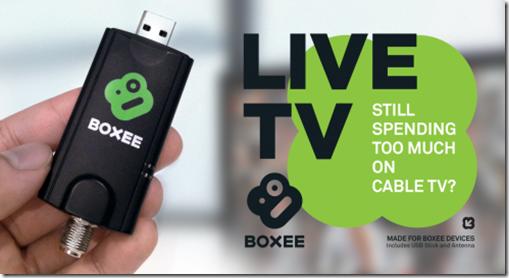 Boxee has continued to be one of the better HTPC solutions for those not needing a TV tuner as part of their system.  Today Boxee added support for one TV tuner to provide LiveTV support for a single channel if you’d like to add some over-the-air (antenna) or unencrypted QAM cable content to the equation.  Don’t get too excited though as there is no DVR support which makes it very limited to most of us.

The tuner is a Boxee branded USB tuner – I’m guessing it’s a Hauppauge tuner built for Boxee.  The support is limited to only this one tuner and without the ability to record those shows it’s very, very limited in real-world usage.  Better than nothing? Yes.  But add the fact you can’t tune encrypted cable channels which means no satellite support and very few channels for most cable systems – none for some. 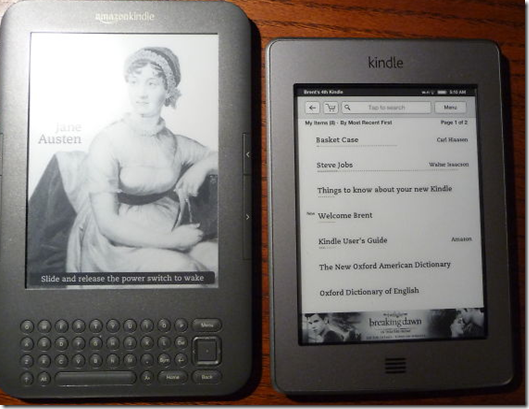 The Kindle Touch is a bit smaller, a bit lighter and without many buttons.  Having used the iPad Kindle app for the past several months after over a year of the Kindle Keyboard I was already mostly used to the page turning and other navigation of the touch screen.  I can report to you that I really love the new Kindle Touch.  It’s a small step up from the other Kindle e-readers in my opinion but one that makes this e-ink reader just perfect for my long-term reads of books.  I’ll still use a tablet for web browsing, newspaper reading and magazine reading, but the e-ink reader is the obvious winner for in-depth reading of novels and the like.  So far this new Kindle has a lot to love an not much to dislike.  I’ll provide a more complete review soon.

I’ve been using the Kindle Fire for much of the last 6 hours this evening and am ready to share my first impressions.  I plan to give it at least a couple of days to give a new device a real chance, but read on for my take so far on the Kindle Fire. 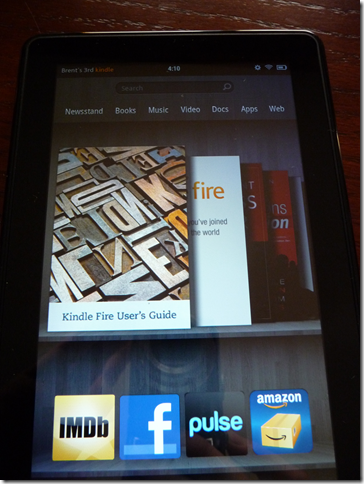 Look & Feel – Not awesome, but just fine for my taste

The Kindle Fire isn’t stunning or anything, matter of fact it’s pretty average looking compared to some other tablets.  But it’s comfortable to hold in one hand and feels very solid to me – not cheap.  The screen when turned off is like all other tablets – it’s  like looking into a mirror.  It’s a little heavier than I expected, but still lighter than my iPad2.  The Kindle Fire weighs in at 14.3oz (405.4 grams) versus 1 lb 5.2oz (601 grams) for my iPad2.

The Kindle Fire has an on/off button and the rest is controlled with the screen.  I miss the volume up/down button I’ve grown used to on iOS and other devices.  There is also no hard, home button so that is built into the touchscreen UI – not really a problem for me like the lack of volume buttons.  The bigger issues I ran into though with the hardware design was the location of the on/off button which is on the bottom of the Kindle Fire when held in a vertical position.  Sometimes when I rested it on the edge in that position it would accidentally turn off – a major annoyance to me in the first few hours of using and I confirmed that this was happening to at least one other new Kindle Fire user. 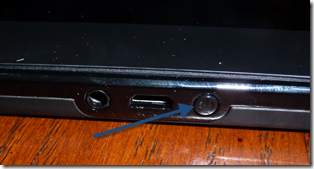 Another dislike MrsGeekTonic pointed out is the speaker location.  When holding the Kindle Fire with both hands your left hand tends to cover up one or both of the tiny speakers – both located on that edge of the tablet.  I’ll mention it just to be complete although most of you reading this already know – the Fire has no camera, no GPS and only Wi-Fi for wireless. 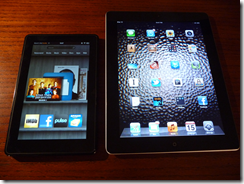 I really like the size and weight of the Kindle Fire – more than I expected to.  The 7” screen tends to be a bit small for some web browsing, but for reading and most other functions you’ll be using the Kindle Fire for it’s not too small.  It’s just small and light enough to hold comfortably in one hand for viewing videos, reading books & magazines etc.  The iPad is just too large for holding it like you would a book or magazine for very long unless you’re resting it on a table or case.  I suspect I would find a 10” screen just right for me.  Apple & Amazon – are you listening?

Video streaming works very well on the Kindle Fire as does music streaming.  Amazon Prime comes free for a month with the Fire although I already had it. 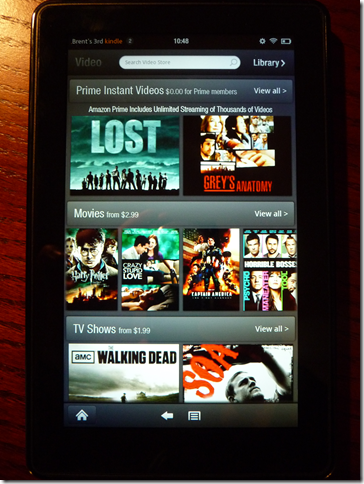 Prime is a good deal if you order much from Amazon and the content selection for video is getting better all the time – I see it as the next Netflix with added perks.  I also have been using Amazon Cloud Drive for music.  It’s working well for streaming to my Kindle Fire so no problems there.

The Kindle brand has been all about reading and this device reflects that focus.  The Kindle reading app is very good and will be extremely familiar to anyone who has used a Kindle.  It’s not as nice for reading for long periods of time (novel reading etc) like the e-ink devices are, but it is backlit for reading in the dark and will work just fine for those casual readers – even better than with the iPad because of its smaller, lighter form factor.  The magazine newstand is nice too with free trials for magazine shopping so you can try things out.  I found the magazine selection very good and reading a magazine looks good as well.

Our first experiences with web browsing on the Kindle Fire were good.  Pages rendered fairly quickly and looked good.  But dig in deeper and you notice some minor issues.  I’ll save most of this explanation for the full review, but just expect less than you get with the iPad and some other tablets on the web browsing performance.  Not a deal breaker, but not perfect either.

The Kindle Fire is priced right at $199.  Don’t mistake this for some of the more expensive tablets with better specs, but for this price it’s a good device in my opinion.  This is a value buy with Amazon backing, a very solid video streaming lineup and much of the functionality you’ll want in a consumption-based tablet.  But you are giving up some things for that lower price.  As long as you’re good with that tradeoff this looks to be a good choice given the lower price.  I’m an iPad owner and I consider that to be the high-end tablet to beat today, but there are things I really like about the Kindle Fire especially for the price.  This thing does the basics most people care about – email, reading books & magazines, web browsing, video, some light gaming and more.  I expect Amazon will keep updates coming to the software on this Fire too so it will get more polished as time goes on.  Best of all, this is Android without the awkwardness that non-techies can enjoy.  The UI really seems uniform compared to the other Android tablets I’ve tried out.

I’ll be back in a few days to go in more depth – if you have specific questions or things you’d like me to address let me know in the comments.

The "Cloud" is likely freaking out Monday night as I'm adding my music collection to Amazon's Cloud, iTunes Match and Google Cloud all tonight.  I do not have a great reason for going with “the cloud” to three different services other than the fact I want to compare the three and see if I want to stick with any of them.

It should be noted that I’ve been at the iTunes Match process for several hours now and I’m guessing Apple’s servers are getting smashed due to today’s public release of their cloud service.  here’s what I see over two hours in: 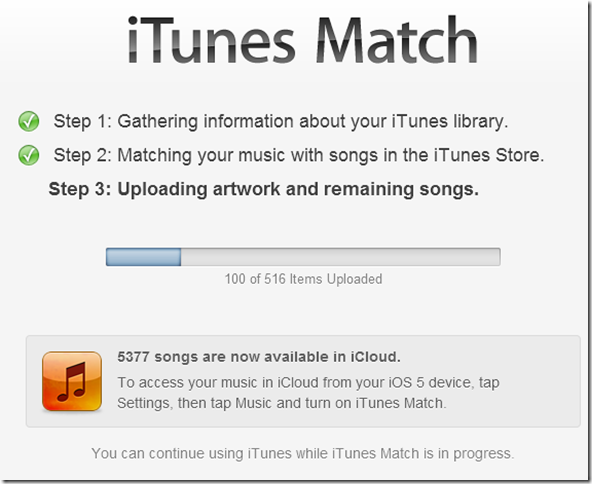 Most of my music is there now, but it’s still working on the last 416 items.  I’ll have to try out the functionality of it all in the next few days. 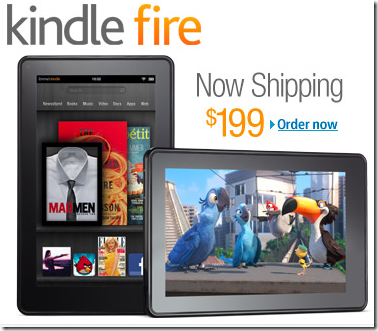 My Kindle Fire is scheduled to arrive Tuesday.  My expectations are medium-high for this low-priced tablet device.  I expect less than my iPad2, but something close to the “others.”  If Amazon did this right it will be a good device for those just wanting a smaller, simple consumption tablet that doesn’t have the Apple premium cost applied to it.  Don’t expect great speakers, a video camera, lots of memory etc.  But do expect decent hardware and lots of content available along with the Amazon backing.

I’ve been browsing the big Tech sites for their reviews and here’s the ones I’ve found interesting: 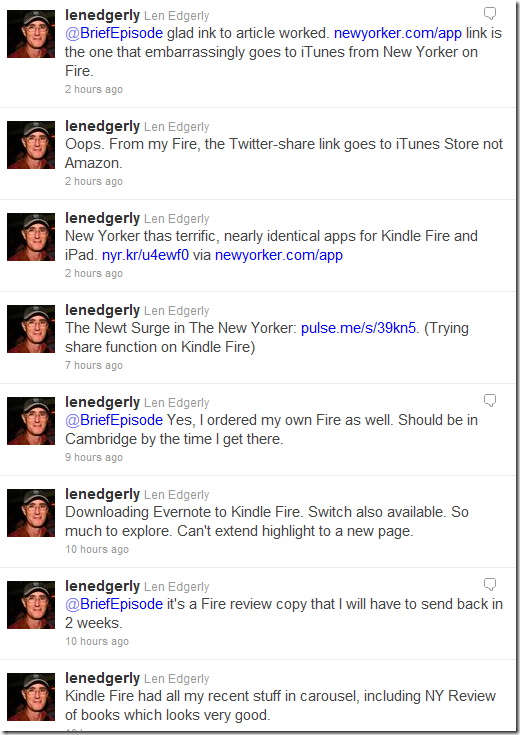 The stakes are pretty high for Amazon with this one.  It certainly doesn’t need to be awesome with the pretty nice price, but it better be a “good” tablet.  If it is, Amazon will change things for itself and become a very serious player even in the same world with Apple and Microsoft.  Fail and they’ve possibly put a bad taste in the mouth of many who may not give their next tablet a chance.

I’ll be providing my own complete review of the Kindle Fire with a good comparison to the iPad2 in the coming days.  Stay tuned for more at GeekTonic!

Sweeps month continues through November 23rd so we’ll continue to see very little in the way of new series and TV Network changes during this time.  There are a few things to note though so read on for the GeekTonic weekly TV update highlighting all the new premieres, finales and specials coming up this week.

I Do Over (10pm on WE) New reality seeries

You Deserve It (9:01pm on CW) New game show series

Dancing With the Stars (9pm on ABC) Season 13 finale