MediaPortal, one of the more popular open-source and free HTPC software programs released the 1.1.0 (Final) version of MediaPortal 1 this week.

The beta version of 1.1.0 RC5 was released last month and the team now has a final version complete and ready for the masses.  They are pretty excited about 1.1 as you can tell by their announcement:

“The development of MediaPortal was a long and bumpy road, but the destination was well worth it. Thanks to our great community, who submitted many bug reports and code patches to fix bugs, we now are able to present you MediaPortal 1.1.0 - the best release in our six year history.” Barnes & Noble continues to follow Amazon in the eBook market in terms of getting their eReader (and therefore their eBook store) as on as many devices as possible.  Today they released the new Nook app for Android devices.  The Android Nook app is similar to the iPhone app that lets you search, browse, purchase, download and of course read eBooks from your Android (1.6 or higher) device.

Features of the Android Nook App:

This keeps Barnes & Noble competitive with Amazon and ahead of the Apple eBook challenges.  Time will tell if Barnes & Noble’s very heavy investment in the eBook world pays off.  Strong competition will continue from Amazon, Apple and soon Google.

SiliconDust HDHR CableCard Might Sort of Work with MythTV SageTV Others

How’s that for a squishy headline!  Making the headlines pop obviously isn’t one of my strengths, but I am pretty good a picking up on “behind the fold” Digital Media news stories like this.  According to one of the SiliconDust employees their coming-soon HDHR Prime, the 3-Tuner CableCard device might have the ability to work on non-Microsoft MediaCenter software including MythTV & SageTV.

Here’s what Nick – a SiliconDust employee had to say:

The video stream for copy-freely content is RTP - same the the HDHomeRun.
There is a ECR under review that would enable us to stream copy-freely content without requiring DRM registration. This will enable streaming to third-party applications.
Internally we use MythTV as part of our QA testing.
Nick

I’m told by someone who knows more about these things that this ECR Nick is speaking of is probably an “engineering change recommendation.”  It seems that SiliconDust might be working with CableLabs on their new HDHR CableCard device that so they can support sending “copy freely” content to devices without DRM certificates.

Is this good news for SageTV, MythTV and other HTPC software?  Yes.  Is it the silver bullet CableCard support we are looking for?  No.  Because we are only talking about “Copy Freely” programming which is pretty rare on the big cable company systems like Time Warner.  It will likely give you much of the same programming you can get with Clear QAM tuners like the existing HDHomeRun tuners.  Still, it’s great to see SiliconDust working to get as much out of the device as they can – and especially recognizing those non-Microsoft HTPCs out there.

Read the forum thread at SiliconDust

thanks to Jakesty for the tip!

Interested in a good Media Player at a great price?  NewEgg (affiliate) has a very nice deal for the Western Digital WD Live HD Media Player for $80 after $20 instant rebate!

Hurry if you’re interested – not sure how long this deal will last.

One of my favorite SageTV plugins this year has been the Movie Trailers plugin.  In the very near future SageTV users will have another Movie Trailers plugin – this one is a bit different though as it’s focused on the latest theatrical trailers instead of finding trailers of shows in your TV Guide or movie collection. Ortus trailers allows you to download, store and watch the latest theatrical trailers from Apple Trailers (more trailers sources are planned for the future) from your SageTV system.

Here is a short demo video of the plugin I put together to give you the feel for the way it works and how great it looks:

The name, Ortus comes from the team that created this plugin.  This is actually a tiny part of the larger SageTv project they are working on to add functionality and beauty to the SageTV UI – much more on that to be discussed here at GeekTonic very soon.

Here’s a few additional screenshots for your viewing pleasure: The plugin isn’t available yet, but should be available in the SageTV plugin manager in the next day or so.  In the meantime you can read more about it at the OrtusTrailers wiki page and this SageTV Forum thread. 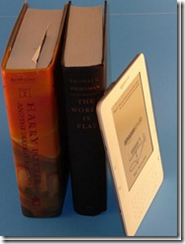 The GeekTonic home has seen it’s share of eReaders including the Kindle, Nook and iPad.  But when it comes to reading books, the Kindle is our all around favorite – especially with the lower (currently $189) price on Amazon.  Today, Amazons Jeff Bezos tells us that Kindle books are now outselling Hardcover books on Amazon.  For every 100 hardcover book Amazon sold in the past 3 months they sold 143 Kindle books.  In the past month it grew to 180 Kindle books for every 100 hardcover books – a sign of further shifting towards eBooks.

Now before we let this talk get too out of hand, lets consider that they are talking about hardcovers and not all books such as paperbacks for instance.  Also consider that Amazon shoppers are obviously much more likely to use an eReader (particularly the Kindle) than the average bear too.  Still, it’s a very significant shift and one that should continue as eReader prices continue to drop into the easy-to-buy range – say $99 or so.  If you want a conversation starter when you travel, carry that Kindle, Nook or iPad with you and expect questions from the crowd – we’ve seen multiple examples of this in our travels the past month and these are not your techie kind of people asking either.

Bezos also went on to talk about the acceleration of Kindle sales after the price drop:

“We’ve reached a tipping point with the new price of Kindle—the growth rate of Kindle device unit sales has tripled since we lowered the price from $259 to $189,”

I’ve been a little surprised that we haven’t seen more eReaders hit the market this year, but I don’t think that’s a sign of the eReader declining.  This Christmas should mark a time when eReaders are cheaper and on many, many wishlists – even with the Apple iPad as an option.

Check out the GeekTonic review of the Kindle from last year Josh over at theDigitalMediaZone has published his review of the long awaited quad-CableCard tuner for Microsoft MediaCenter.  The tuner has been delayed repeatedly but looks to be coming very soon – they say in the next month or so.

Josh’s take on the Ceton is positive to say the least:

Check out the complete review at theDigitalMediaZone

Good news for my neighbors up north!  Canada, who has been without access to Netflix (among other streaming & rental sites) from the beginning will be given access to the popular Netflix movie rental & online streaming service.

There is a new Netflix-Canada landing page online now although it’s redirecting US web users to their .com site. You Canadians can sign up now to receive updates and more information.  There isn’t a specific date stated, but they do say sometime this Fall.

Email ThisBlogThis!Share to TwitterShare to FacebookShare to Pinterest
Labels: netflix

HTPC and Home Automation enthusiasts rejoice.  SageTV, the popular multi-platform HTPC now has the ability to control your Home devices such as lights, garage doors, fans or any HomeSeer-connected device right from your SageTV user interface.

InControl is a $29.95 plugin for HomeSeer and SageTV. It provides a real-time interactive interface between SageTV and Homeseer. With InControl, you are provided with easy to use, graphical interface in SageTV to control and monitor any HomeSeer devices. In addition, you can use HomeSeer to broadcast messages to SageTV.
Features:

Main Menu from the SageTV/InControl Screen: They’ve already put out 2 updates to the first public version which is a good sign that new features will continue and the plugin will be well maintained by the developer.

Each week GeekTonic covers the TV scene with a complete listing of premieres, finales and specials for the week.  Mostly low-profile shows this week, but a few notables.  Check out the complete list of new premieres and finales below.

The Client List (9pm on Lifetime) – Jennifer Love Hewitt stars in this made-for-TV Lifetime movie.  A woman (Hewitt) unknowingly takes a job at a massage parlor where prostitution is the norm…  Also stars Cybil Sheppard

If You Really Knew Me (11pm on MTV) – Season premiere

The Pillars of the Earth (10pm on Starz – Available in HD) – An 8-hour miniseries based on Ken Follett’s 1989 bestselling novel “The Pillars of the Earth.”  The story involves a secret that disrupts the succession to the English crown.  If you don’t subscribe to Starz this will also be available on Netflix Watch Now 7/24/2010 – this is how I’ll be watching Spartacus: Blood & Sand from Starz also since it’s available on Netflix Watch Now today.

Doctor Who (9pm on BBCA – Available in HD) – Season 5 finale