One of the last disadvantages of the Kindle compared to other true e-Ink readers is being eliminated by Amazon – Later this year, the Kindle will have the ability to check out library e-books onto their Kindle.  And it will include some enhanced features not available on other e-Readers. 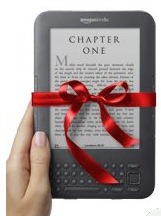 Amazon announced “Kindle Library Lending” today, a new feature that will allow Kindle users to borrow Kindle books from any U.S. library that supports the Overdrive platform (currently over 11,000 libraries in the United States.)  This free new feature is planned for later this year and will be available for all generations of Kindle devices and free Kindle reading apps.

Kindle users will be able to check out a Kindle book from their local library and start reading on any Kindle device or free Kindle app for Android, iPad, iPod touch, iPhone, PC, Mac, BlackBerry, or Windows Phone. As an added feature, you can annotate and bookmark your borrowed library book and if you check that book out again or if that book is purchased from Amazon, all of your annotations and bookmarks will be preserved.  You will also be able to sync that borrowed book across your different Kindle devices so you can read on the Kindle and pick up where you left off on your iPhone or Android phone while on the move.

The best place to pick up the Kindle is online at Amazon with free shipping and no sales tax for most states:

Give the Gift of an eBook with Kindle

The Home Theater PC software I use, SageTV has built-in capability to transcode TV recordings and some movies to other media formats including iOS and android-friendly formats so you can take them with you so-to-speak.  There is now an app for Windows MediaCenter app that lets you do the same thing for your MediaCenter program! Damian at MediaSmartServer.net has a great review of the new simple.tv program.  here’s what Damian has to say about simple.tv:

As always, Damian goes into plenty of detail for those interested.  Check it out at MediaSmartServer.net The new Sonos Android remote control app works much like the iOS app for Apple iPhone and Apple iPad.  You can control your Sonos system completely with the Android and iOS apps browsing through your music collection as well as the many online music sources available.  It allows for control of multiple Sonos devices, volume etc.  The new Android app also allows for the use of voice commands for searching through music artists, albums and tracks.

Below is the Sonos promo video about the Android app:

Email ThisBlogThis!Share to TwitterShare to FacebookShare to Pinterest
Labels: Sonos

Time for this week’s complete listing of premieres, finales and specials for the week.

Here’s a little movie trailer for the Burn Notice “prequel” airing this week:

Game of Thrones (9pm on HBO) This premiered Sunday, but is re-aired all week on HBO.  I don’t currently get HBO, but it looks pretty interesting.

William & Kate (9pm on Lifetime) Not sure what to call this so I’ll call it a movie.  It’s about Prince William (Ben Cross) meets Kate Middleton (Camilla Luddington) at the University of St. Andrews in Scotland, and they begin a royal romance.

Burn Notice: The Fall of Sam Axe (12:05am on USA) This premiered on Sunday, but is aired again Monday, Friday and Saturday.  This is a made-for-TV movie spinoff of Burn Notice that focuses on Sam (Bruce Campbell) in a little prequel that goes back to a mission Sam was on in 2005.

Parenthood (10pm on NBC) Season 2 finale.  I now have all of the episodes of this family drama and plan to see if it’s worth watching like I’ve been hearing.  If so I have two seasons to get through.  If not… lots of extra space on the DVR/HTPC.

Saving Pelican 895 (9pm on HBO) A documentary about cleaning up from the 2010 oil spill in the Gulf of Mexico.  Happy Earth Day!

Star Blazers: The Quest for Iscandar (midnight on SyFy) New Anime Series.  Note:  Not in HD.

Have Cake Will Travel (10pm on Food) New reality/cooking series