PogoPlug Gets Updated with more features and USB Ports Many of you likely know of the Pogoplug, a tiny box that lets you plug in a USB hard drive into your network and automatically connect that storage device to your network.  It has built-in software to stream media and even has a nice iPhone/iPod app too.  Pogoplug is something I use as an extra storage server in my GeekTonic home.  Well today the second generation of Pogoplug arrives and it appears to have a thing for pink… Email ThisBlogThis!Share to TwitterShare to FacebookShare to Pinterest
Labels: PogoPlug

Recording Video Gameplay -The Other Use for the Hauppauge HD-PVR

When the Hauppauge HD-PVR was announced over a year ago, the news was welcomed by HTPC enthusiasts everywhere as a way to avoid the draconian content protection schemes of the media companies, cable and satellite companies.  And the HD-PVR from Hauppauge has definitely become one of the key cogs in my home theater PC setup using SageTV.  But one of the most popular uses for these little HD-PVR boxes isn’t PVR, it’s recording video gameplay.

This video by “dizzydougtv” provides a tutorial on using the Hauppauge HD-PVR to record gameplay.

Now I think anyone watching me play videogames is a sure-fire way to put them to sleep – or at least laugh at my videogame performance.  But I know there is a very large number of videogamers using the HD-PVR to record their video gameplay.

Syabas, makers of the Popcorn Hour media players is telling its users that “As of Wednesday, December 2, 2009, YouTube will no longer be available to Popcorn Hour users.”  This is a move by Google to push CE makers to use the XL version of YouTube instead of the existing API method.  While I would imagine Syabas (and other CE companies) will work to build the XL version into their media players eventually, it will likely take a while.

It’s very likely we’ll begin to see this with other Media Players and consumer electric devices that have been implementing a YouTube app on the device via the API.  Google is doing this likely to control the content that is used and allow for advertisements and control of the YouTube UI itself.

From the consumers perspective this is not a good move by Google.  Then again, viewing YouTube videos on the TV or even PC has become a rare occasion by me – this will likely make it even more infrequent.

Look Ma, No Batteries On My Remote Control!

We’ve looked at quite a few remote controls in our day, but this would be the first one powered by the hand – with no batteries required! This is a concept design remote control designed by NEC and Soundpower.  It doesn’t require batteries to work.  Instead it obtains its power from the vibrations of your hand pressing the buttons.  Sort of a self-sustainable electronic device if you will.

Unfortunately we won’t see anything like this in the near future, but a very interesting concept nonetheless.  Now if they could just make my phone battery-free…

XBMC, the popular, free Home Theater PC software program has another cool app for its users.  EqUiNoX created a program that lets you control XBMC from anywhere on your network – as long as its a Windows computer.

Here’s a screen-shot of the skinnable Virtual Controller by EqUiNox: It’s been a long wait, but Canadians can finally purchase the Kindle in the Amazon Kindle store.  When Amazon announced the International Kindle, they left Canada off the list – the rumored reason being mobile connectivity agreements. 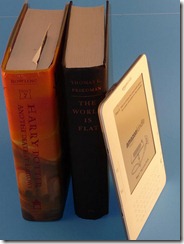 Amazon announced that customers in Canada would be able to purchase the Kindle and the 300,000-Plus eBooks from the Kindle store.  The Kindle is available for shipment immediately.  One strange item of note I noticed on the description on Amazon.ca, - The Kindle’s web browser and blog subscription service will not work in Canada but customers will have free access to Wikipedia.

Amazon is beating Barnes & Noble to the punch on this one after all.  While Barnes & Noble announced that eBooks would be available in Canada, their Nook eReaders as of yet are not available for order in Canada.

Thanks to Wayne for the tip!

MythTV itself is a Digital Video Recorder for Linux which records from various television sources. To make it a complete media center HTPC, it also needs playback of video files and DVDs.

NOTE:  This is a guest post by the author of GadgetWisdom.   Basic guidelines for writing and submitting a guest post at GeekTonic can be found here.

MythVideo is a plugin that handles all of your video needs. Over time, it has become more and more an integrated part of MythTV.  With the new 0.22 version of MythTV, MythVideo is dramatically expanded with support for new metadata information, TV Series handling, Fanart, Banners, Screenshots, and a host of new browsing features.

The biggest change is that MythVideo now supports storage groups, a feature previously introduced for recordings. The feature is still in a preview phase, but it means videos can be watched with zero configuration on the frontend. Under the older system, each frontend had its own video directory settings. Thus, if you wanted to share files from a central server, you needed to set up an NFS share.

If your Home Theater PC setup has an add-on that grabs TV album art and metadata, you probably use theTVDB, a website solely dedicated to hosting and organizing that TV metadata.  Unfortunately, thetvdb.com has been down most of the past weekend and remains down at the time of this post.
This is apparently due to problems with their server and datacenter.  The good news is they appear to have it ready to bring back up (at least in some form) by tomorrow morning according to this post on their forums:


“good news from Crazzykid. Power won't be up until Wednesday or Thursday, but he's going to the co-loc early this evening (a few hours from now) to get the server. We'll get it online tonight. Tomorrow he'll be moving the server image onto his SAN and a production VMWare server. That will allow us to increase the ram to about 16gb at the same time. Once it's all moved, the current server will be used as an additional mirror box so we'll increase our redundancy a bit in the near future.”


Since thetvdb is the main TV scraper for SageMC, XBMC and countless other HTPC programs, you likely can’t update the metadata for those TV shows for now.   To keep up with the progress on the site watch for status updates at their forum.  And if you really miss them, you might consider a future donation to the cause to help them continue to “serve” the masses.
at 11/16/2009 08:50:00 PM