One of the really silly restrictions Microsoft put on MediaCenter users is the limits on the number of tuners they are allowed to use.  Well today it appears there is a way to get around that 4-CableCard Tuner limit:

Method #1:  MissingRemote tells us about TunerSalad an app that circumvents that restriction with ease.

Method #2: BigScreenEPG has had this capability for a while now and since the cat is out of the bag on getting around that restriction they decided to let everyone know how.  Read more about the BigScreenEPG method here So there you have it.  Go ahead and ignore the dumb 4-CableCard restriction on Windows 7 MediaCenter and record as much cable TV as you can stand!

Newegg has the Kill A Watt P4400 Electricity Usage Monitor on sale today.

I have one of these Kill A Watt’s and use it to determine how much electricity each of my HTPC and other gadgets are using.  It’s cheap and worth every penny.  This helped push me towards weaning myself off of full-blown HTPC’s at the TV and use more efficient extenders instead.

Note: You may need to subscribe to their newsletter for the coupon to work

This same device cost $19 at Amazon Engadget has a rumor post up today (I’ll consider it a rumor until official) about the much talked about new version of AppleTV expected this Fall.

Take this information with a grain of salt.  It’s just a leak and we never know about these things for sure until Apple tells us.  I personally can’t believe they would try to pull this one off as the new AppleTV, but I guess you never know…

Check out the story at Engadget

The pace for beta updates from SageTV has definitely picked up in the last few weeks.  Today brings yet another beta update to the SageTV 7 HTPC software – for Windows, WHS & Linux versions.  This update (7.0.15) includes a bunch of bug fixes and some new features.

If you’re participating in the SageTV Beta, head over to the SageTV Forums for more information and the downloads.

It’s here.  The quad-CableCard tuner from Ceton began shipping out to those who pre-ordered and the first few hands-on reports are trickling out. 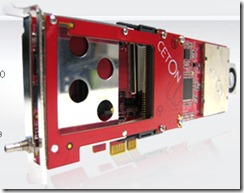 For those who aren’t familar with this Ceton tuner here’s a quick review.  Ceton has been talking about producing & selling a CableCard tuner for a very long time – so long some called it vaporware.  After a long process they were set to have their CableCard device ready, they ran into manufacturing issues which continue to slow shipment for some of the pre-orders.

This particular Ceton tuner is unique for the following reasons:

This tuner will cost you $400 so it isn’t cheap by any means, but it does seem to be a good piece of hardware.  Here’s the first few reports:

theDigitalMediaZone had a review mid-July and their praise was strong:

MissingRemote has the first of a planned 3-part review of the Ceton 4-CableCard tuner.  This review was strikingly detailed especially considering it is only the first of 3 parts.  Be sure and check out the forum thread that goes along with the article as there is a lot of good information there as well.  From the review:

“Fast channel changing. Typically in the 2-3 second range but when all four tuners were in use channel changing would take a little longer, up to 5 seconds. Still much better than any other tuner in the system, including the Comcast set top box.”

Windows Team Blog from the official Microsoft angle.  The summation of this review can be determined from the not-so-subtle article title: “New Ceton Digital Cable Tuners Make TV in Windows 7 Awesome”

EngadgetHD had a review at the end of March with a pre-production version of the Ceton Card.  Definitely detailed and thorough review as always by Ben Drawbaugh

GreenButton has some useful information along with the normal forum thread noise.  Not really a review, but some firsthand reports in there along with some good info.

If you happen to be the lucky owner of a new Ceton CableCard let us know in the comments how its going.

For the past several years I’ve diligently shared with GeekTonic readers the list of upcoming TV premieres, finales and specials.  And along with that I tell you which shows are available in HD too.  But one thing I just haven’t kept up with on those weekly lists is the sporting events.  This troubles me a little because I really like sports – especially in HD or in person.  Today I wanted to point those of you who care about sports on your HD TV set in the right direction.

I do throw in a significant game or two on my weekly TV list, but I wanted to share with you my go-to site for those times when you want more info on sports TV.  Each week Phil Lozen of the Digital Media Zone shares with us the sports on TV for the week including their HD goodness.  If you’re a sports fan, consider adding this to your TV to watch reading list:

Since SageTV 7 was released to beta this year there have been several custom themes created to change the look of your SageTV user interface.  Today we’ll take a look at each of the currently available themes and run through the basic steps for installing custom themes.

Before we get started I wanted to review the difference between a custom theme and a full UI replacement:

Full UI Replacement and/or Add-on = Thes not only change the backgrounds and icons, but also change the way the user interface works and even modifies the layout.  We’ll take a look at these in a future article.

Custom Theme = A theme changes to appearance of the user interface.  This can involve different backgrounds, different fonts, icons etc.  The menus still work the same way and the layout remains the same.  This is our focus today.

In this article I’ll only show a few screen-shots to give you an idea of the theme.  I’ll do a more in-depth look at each theme individually with screen-shot and demo videos in a later article.

This isn’t really a custom theme.  It’s the theme that comes bundled with SageTV7 and is what you see when you install SageTV 7.  Keep in mind though that the standard UI could change a bit in SageTV 7 once it is released from beta. This theme is my favorite of the bunch and the one I use most of the time.  The backgrounds are easy on the eyes, the highlight showing the focus of the menu is a bolder orange that makes it easy to see where you are in the guide or menu (a feature MrsGeekTonic really likes). This theme basically takes the standard SageTV theme and makes the panel backgrounds opaque.  Not a big difference, but some users found the new semi-transparent panel backgrounds hard on the eyes so this plugin was developed to address those requests.

This one was just added to SageTV 7 this week and will be familiar to many long-time HTPC users.  BlueTwo has been around older versions of SageTV, XBMC, Media Portal and others.  This is a version updated for SageTV 7. This theme goes along with Plucky's Menu Mod plugin (more than just a theme) which does the following:

Here’s a video showing it in action: 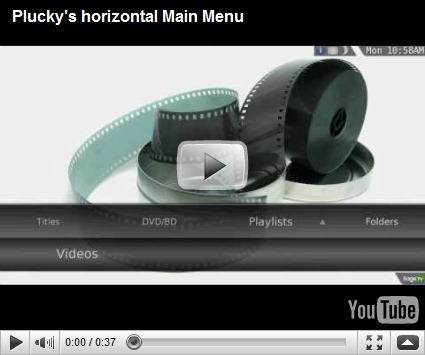 How to Install New Theme:

The steps to download & install a new theme are fairly easy.

2. Select “Theme” from the Plugins menu

3. All available themes will be listed like you see in the screen-shot below. When you select any of the available themes, you’ll have the option to view plugin details including version history and you can also view any screenshots the plugin developer provided – right from the UI.

5. The status bar will indicate that the new theme is loading

6. Once the new theme is installed (should take a less than a minute) you’ll see the changes to the background, icons etc.

How to Change The Theme After Installing

Lets say you have several themes installed already in SageTV and you want to switch to a different installed theme.  Here’s how you do this:

1.  From the SageTV Main Menu go to Setup>Detailed Setup>Advanced>Select the User Interface Theme> 3. Select the theme from the list (this will only show themes you’ve downloaded & installed from the Plugin Menu.

Uninstalling or Updating a Theme

If you want to upgrade a theme that has been updated or uninstall a theme, head back to the Plugin Menu at: Setup>SageTV Plugins>Installed Plugins> page.  Here you can update or uninstall any of your themes.

Email ThisBlogThis!Share to TwitterShare to FacebookShare to Pinterest
Labels: How To, htpc, SageTV, SageTV Basics, Theme

A day or so after updating SageTV to the 7.0.12 beta version, the SageTV team dropped another update.  This one is a super-tiny update, but in important one to fix two issues caused by version 13 (Guess it was just an unlucky one):

Do you use N-PVR, the next generation of the popular freeware HTPC software formerly known as GBPVR?  There have been several, important updates since June.

The latest beta is 1.5.28 and is available for download with many bug fixes and improvements.

Here is a sampling of the new features & fixes:

Each week GeekTonic covers the TV scene with a complete listing of premieres, finales and specials for the week.  We are in that TV wasteland of August where there’s not much in the way of quality airing.  Still, there are several finales and some premieres to so check out the complete list below. The Uprising (8pm on Animal Planet – Available in HD) – A special presentation with this focus:  “Surprising instances of aggression suggest animal species across the globe are becoming more violent toward humans.”

Bachelor Pad (8pm on ABC – Available in HD) – New reality series taking 20 former Bachelor contestants and putting all of them under one roof.  A show set out to prove that the Bachelor and Bachelorette series have absolutely nothing to do with…. marriage.

Flipping Out (9pm on Bravo – Available in HD) – Season 4 premiere for this reality/house flipping series.  My questions is this:  Do people really still flip houses in this economy?

Hard Knocks: Training Camp With the New York Jets (10pm on HBO – Available in HD) Season 6 premiere (thanks to Andres for the tip as I missed this when I first posted)

TNA Reaction (11pm on SpikeTV) – The series premiere (this episode was aired in April and picked up as a series shortly after).  A wrestling fan experience/behind-the-scenes show…