My favorite Home Music Server just got better.  Today Sonos has released this teaser video showing off their new Android Controller (much like their very popular iOS Controller) for the Sonos music system.  Like the iPhone, iPod touch and iPad apps this one will be free.

Email ThisBlogThis!Share to TwitterShare to FacebookShare to Pinterest
Labels: Sonos

Newegg is selling the Logitech Harmony 900 RF Universal Remote Control for $249.99 after $120 instant rebate and $30 Mail-in-rebate with free shipping.

Product Description:  The Logitech Harmony 900 Universal RF Remote Control features RF wireless capability that lets you control devices even when you can't see them. You can control all of your home-entertainment devices with one remote that reduces clutter and complexity in your living room. Recharges in its base station, so you won't be looking for batteries when you want to be watching TV.

Congratulations to GeekTonic reader Jeremy who goes by the twitter name “GollyJer”.  Jeremy won the GeekTonic VidaBox iPad Frame Giveaway  (Head here for the review of the VidaBox iPad Frame).  I’ve confirmed with Jeremy and it will be shipped his way this week. 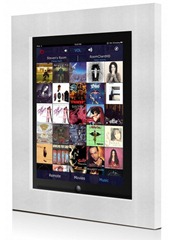 Thanks to all who entered and a special thanks to the VidaBox Team for providing the iPad Frame for review and for the giveaway.

Even if you didn’t win, you can pick up this nice, iPad Frame and many other Home Theater & Automation products at the VidaBox Store.

Now this is something those who haven’t adopted eReaders yet will chuckle about:  Amazon let us know today they have a beta preview of the next Kindle firmware that includes real page numbers!  Here’s how Amazon describes this:

“Real Page Numbers – Our customers have told us they want real page numbers that match the page numbers in print books so they can easily reference and cite passages, and read alongside others in a book club or class. “

To be honest, this is an issue some with eReaders have complained about for good reason.  Most times for me it’s fine to only know the percentage of the book I’ve read so far, but there are times you want/need to compare where in the book you are compared to others so this will be a very welcome feature.

The old page location info looked like this on the Kindle:

The new page numbers will display like the diagram below:

Depending on the font size and other formatting on your Kindle, you’ll often be on the same “page” of a book through multiple screens so the location number may change, but the page wouldn’t in that case.  Only the corresponding page number for the text displayed at the top left of the screen will be shown.

Another nice part of this update is the ability to “Go-to” a certain page in a book via the menu.  Again this is useful in a class or book club type situation.

Page numbers are only displayed on Kindle (Latest Generation) with software version 3.1 or higher.

The official Amazon announcement is at Amazon.com and you can download the update from there as well if you don’t want to wait for it to be pushed out wirelessly.

Well known HTPC developer Andy Van Til  released his SageDCT program out of private beta this past weekend.  SageDCT allows SageTV users to tune and record digital cable channels using any CableCard HTPC tuner along with HTPC software SageTV 7.  This program doesn’t require the use of Windows 7 MediaCenter at all as it tunes directly using SageTV.  The one, big bummer continues to be the fact that you can only use this with Copy-Freely content which keeps me from trying it since I have Time Warner Cable which is notorious for flagging all channels as Copy Protected except for the over-the-air channels like the major 4 networks and PBS.

Still, for many this will be very welcome news.  Check out the short video Andy made demonstrating how quickly channel changes are executed.

Time for another round of TV Talk.  The SuperBowl “event” is over and its time for a few new primetime TV series to premiere.  Read on for this week’s complete listing of premieres, finales and specials for the week. The Chicago Code (9pm on Fox – HD) New Police Action/Drama series on Fox.  This one has been getting some pretty positive buzz from the TV critics and I’ll be checking it out.

Traffic Light (9:30pm on Fox – HD) New sitcom series where longtime friends try to achieve balance in their romantic relationships with their need for freedom.

Mr. Sunshine (9:31pm on ABC – HD) New sitcom series starring Matthew Perry as Ben Donovan, manager of a less-than stellar San Diego sports arena who begins to re-evaluate life on his 40th birthday.  Mrs GeekTonic asked me what I’d heard about this one given the friends connection so I checked out comments from the TV critics who have seen the first episode – most reviews were less than positive.

Inside the NFL (9pm on HBO – HD) Season finale

Only in America (9pm on History – HD) New series where comic “Larry the Cable Guy” searches throughout America to find interesting facts about America's history.