It’s obviously a serious gift-buying time around the world.  And a countless number of “bad” gifts will be purchased and gifted only to be tossed aside to join the museum of bad gifts.  Unfortunately well-meaning tech-centric gifts often end this way.  I’m here to change all of that starting with another simple accessory, the travel power strip.

Option #1:  Belkin Mini Surge Protector/Dual USB Charger – this handy little travel power brick comes in at 6.1 x 5.2 x 2.3 inches.  It isn’t tiny, but still fairly compact and weighs only 9.6 ounces.  It also has two USB ports that will charge 5V / 500mA at each port.  Before you iPhone users get too excited about these USB ports understand the iPhone's chargers puts out 5V @ 1A – not the 5V @ 500mA that you get with this one.  You can charge your apple devices with the USB ports on this thing, but it will be slower and only one of the two USB ports at a time as it’s limited to 1A at a time total. 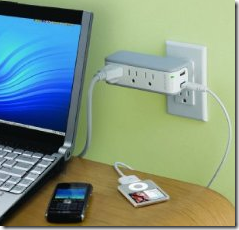 I like that the plug end of this power brick rotates 180 degrees so that it fits the position of most outlets.  I’ve used this device in many airports and have shared the power from it with others hovering around the power outlets.

Note:  Thanks David & Scott for the recommendation on this one!

The Belkin Mini Surge Protector/Power Strip is currently available on Amazon for $18.43

Option #2: Monster 4 Outlet Travel Power Strip – I purchased the Monster Outlets To Go 4-outlet power strip about a year ago as I was attempting to lighten my travel load even more.  This compact power strip is even lighter and smaller than the Belkin.  It doesn’t have the USB ports, but it fits wall outlets even better and it includes four plugs!  This is my go-to power strip for travelling.  It measures a tiny 2.2 x 6.2 x 1.8 inches and weighs only 2.4 ounces!  I highly recommend this power strip if you travel much or need a power strip to carry in your laptop bag.

Notice in the photo below (next to the iPhone for size comparison) the cord neatly wraps around the power strip and plugs into one of the four outlets – genius! 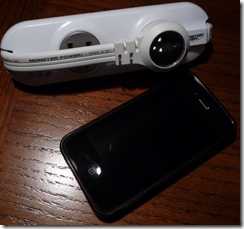 This photo shows the power strip “unplugged”.  There are two outlets on each side which should be enough for most of us power-hungry tech travelers. 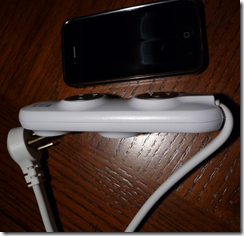 The Monster 4-outlet travel power strip is currently available at Amazon for $9.15

For another great, inexpensive gift idea, check out the blueLounch Cable Drops

It’s obviously a serious gift-buying time around the world.  And a countless number of “bad” gifts will be purchased and gifted only to be tossed aside to join the museum of bad gifts.  Unfortunately well-meaning tech-centric gifts often end this way.  I’m here to change all of that starting with a simple accessory, the blueLounge CableDrop 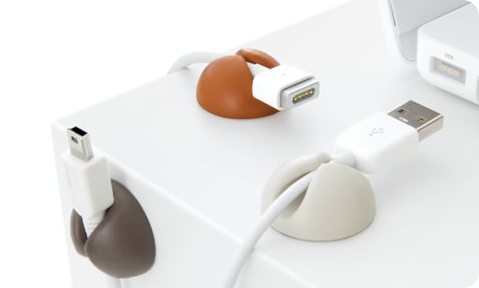 These are simple, flexible cable management clips for your desk and other locations you need to keep those cords under control.  There’s an peel-off adhesive on the bottom of these so you can place them anywhere.  I use them at my home office, bedside table and at work.  The look nice, don’t cost much and they work.  These are an easy, useful gift that could be used as a stocking stuffer for your favorite geek or pretty much anyone who deals with cords – read: anyone!

Purchase at blueLounge or Amazon

Thanksgiving is over here in the U.S. so it’s time to get back to TV series.  Read on for the GeekTonic weekly TV update highlighting all the new premieres, finales and specials coming up this week.

One Born Every Minute (10pm on Lifetime) Season 2 premiere

I Hate My Teenage Daughter (9:30pm on Fox) New comedy series where two women have daughters who act exactly like girls who made fun of them in high school.

Weed Wars (10pm on Discovery) New reality series.  Yes, they just did that – a reality show focused on cannabis.

Hairy Bikers (10pm on History) Season 1 finale of an excellent example of the pitiful state of the “history” channel.

Welcome to Sweetie Pie’s (9pm on OWN) Season 1 finale