This will be my place to post updates on my current tech-related projects I work on. Here's a list of things I have ongoing:

HTPC:
I use Snapstream's Beyond TV and Beyond Media software to run my HTPC/PVR in the house. The software isn't perfect, but I have a nice working system that the wife & kid are actually happy with. I'll be tinkering with this for years to come.

Laptop Picture Frame:
I'm using my wife's old Sony VAIO laptop as an experiment. It died a year or so ago due the the power connector disconnecting from the motherboard. I bought her a new Dell laptop and have disassembled the darn thing to a point. If I ever get it working again, I'll re-assemble it as a digital photo frame.

Jukebox:
I have my dad's old Pentium 133 PC that I'm adding jukebox software to as well as some MP3s. Some day I hope to use the innards of this PC inside of a bar-top jukebox for the game/media room.

Where did all of these blinking lights come from?

Part 4: Where did all of these blinking lights come from???

As I began adding music mp3 files, ripped DVD movie files and mpegs with saved TV shows I quickly realized I was going to need some additional hard drive space. I began buying internal hard drives and then even some external hard drives. Both my wife and kid began recording all of their favorite shows and even some that they thought they might be interested in. I’ve had several occasions when people walked into my office where I had the server PC and each of the external drives and asked me “what are all of those blinking lights? It looks like you have some sort of electronic lab in there!” Eventually all of the externals were moved to the basement to make the wife happy though.

It became habit for our family to rarely watch live TV so that we could always skip commercials. In addition, we began to record history related shows so my wife (a high school history teacher) could use them for class. Amazingly, we kept the 250GB hard drive at least half full most of the time.

After using and tweaking Meedio for many months, I began test-driving Snapstream’s HTPC front-end counterpart Beyond Media. I like Meedio and the flexibility it offered, but it seemed to have issues fairly often. I was constantly having to change settings, update versions of plugins etc. to keep it working. In addition, the way Meedio started up BTV for TV watching was less than perfect. Beyond Media was not as powerful and had some issues, but it did work much better with BTV so I decided to make the switch. More on Beyond Media in the next post.
at 8/17/2006 03:02:00 PM

The PC runs my TV - Snapstream Beyond TV

Do I dare replace the cable DVR with the computer (or) how Snapstream Beyond TV took over our TV! The wife & kid could revolt here... Part 3

Now that I had Meedio working fairly well I turned my attention to the TV PVR function. Ultimately I wanted my PC to run everything going to my TV including TV itself. I ordered a Hauppauge PVR 500 dual tuner card, installed it and tested it with Hauppauge’s software. All worked well so it was time to try out some of the PC PVR programs out there. Others on the meedio forums were mostly using BTV or SAGE for their TV/PVR software and starting the TV program from meedio.

Sage Trial
I first downloaded the trial of SageTV. I spent several days setting it up. With the help of posts on the forum I finally got everything set up. It worked well. Things I didn’t like about it was the fast forward wasn’t a true fast forward – it was sort of a skip forward and not smooth. The look wasn’t as polished as I would like, but it was o.k. Still, it worked and seemed like it could be what I was looking for. I started trying out some of the add-ons available. Again these were a lot of work to set up. Commercial skipping was one that I wanted and once I got it working it was very nice.

Snapstream Beyond TV Trial
Next I tried Snapstream’s Beyond TV trial. My first impression was very good. The menu screens were clean and easy to read.
Everything I tried worked without a lot of setup. The setup process for me was perfect. I tweaked was the recording settings to use up less disk space I used a slightly lower quality setting. I also added two minutes padding – this means if I set up BTV to record a show that starts at 7pm and ends at 8pm, the recorder will start 2 minutes before 7pm and end 2 minutes after 8pm. This is done to prevent loosing part of a show when the networks mess with the timing of shows. Other than that I didn’t have to tweak anything else. It automatically detects commercials and marks them so that when you watch a recorded show and come to a commercial, you just hit the channel up button on your remote and it goes to the end of the commercial. Sage had a similar capability, but it required an add-on and additional set up. After trying out Snapstream for a few weeks I was sure that BTV was the right one for me. To the left is a creenshot of the BTV Guide. The Red Dots denote shows to be recorded.

I think it’s a good idea for anyone thinking of purchasing one of these programs to try both out to see which one is best for them. You can also find out much information on the Snapstream forum, SageTV forum, HTPCNews, and BYOPVR. Just keep in mind that we HTPC users are a biased bunch so our opinion is likely slanted one way or another. I truly believe that it is best to try out both before you buy. While you’re at it try out the free, open-source options also. They are pretty good and constantly improving. My goal was an easy setup and good WAF (wife acceptance factor). This is why I chose BTV for my PVR.

Once I decided on BTV, I set up meedio to launch BTV as the default PVR/TV program. I then sprung it on the wife & kid. Both seemed to figure out the functions of BTV quickly. The main feature they both liked was the commercial skip. They still to this day complement that feature when watching TV.

The PC as an entertainment server (HTPC) - Part 2

Could I actually use my PC as an entertainment server? – Part 2

Since that time, I had begun ripping my movies onto my PC’s hard drive after having trouble with several of the DVD’s getting scratched and not playing well on different DVD Players in the house. I had read in a PC magazine about these PC based Home-Theater PC’s. Using the PC to play movies, listen to music (mp3’s) and even replace your DVR/Tivo. This article even talked about using your existing PC to do it! I’ll admit I am a tinker by nature especially when it comes to PC’s so I was very intrigued. I mentioned it to the wife and she rolled her eyes and said “go ahead as long as I can still watch tv without you messing things up”. Boy did she not know what she just gave the o.k. on!!! 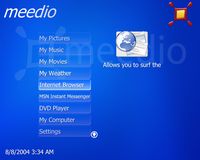 
First, I did a bunch of research on the net and in some magazine articles. I decided to start with Meedio just to run movies and music. I did a trial of Meedio and became hooked. Meedio took a lot of tinkering for me to get it right. In fact, it took me many months just to get it usable for what I wanted, but I did get it working. Next I drilled a hole from my office where the PC was into the living room [honestly I drilled two holes one of which was in the wrong place and I still get razzed about even today by the wife J]. I ran a svideo cord and audio card from the back of the PC in the office to the living room PC. After fighting the video card to show the same picture on both the PC monitor and the TV for over a week I finally go those working. Next up was getting a remote to run. I already owned a Home Theater Master MX500 which was programmable. I purchased a usbuirt and girder. After a week or more of setting up the remote to run the meedio program, the computer TV and receiver I got it to work. We began using the computer to watch movies and to listen to mp3’s that were on the PC. We had to switch inputs on the TV back and forth to go from TV to the meedio program, but it was a start. One of the first benefits was being able to listen to a large collection of music with the click of the remote. Shuffle through the music and listen to a variety rather than one or six CD’s at a time. Also, the entire pile of CD’s went to the basement – never to be heard from again….

For movie watching it was nice to be able to select the movie we wanted without searching for the disc and sticking it in the dvd player. All you had to do was search by genre, movie name, release date etc. all the time browsing the movie covers with descriptions. This was an instant hit with everyone who tried it. The main drawback was the constant tinkering I had to do to upload each movie and keep the thing working. There were a lot of bugs whether program related or my fault – it still took a lot of work on my part.

How I ended up using my PC to run TV, Movies and Music in the house

Changing the way we watch TV - Part 1
Back in 2003 or so I rented my first DVR machine from Time Warner Cable. I had heard of the TIVO's and replaytv, but had never tried them out. I always thought I didn’t watch enough TV for it to be of any use to me and didn’t want to pay a subscription fee every month or year. Then I received this offer from my cable company to upgrade to digital TV with the DVR box for the same money I was paying already. It was an introductory 6 month trial, but I thought why not! Well the rest is history. Not only did my wife & daughter instantly get hooked on the ability to pause live TV and record shows from the online guide with ease, I also found myself watching more of the shows I really wanted to. It was then I realized I would never watch TV ads again unless it was a live sporting event.