One of my favorite new features of the new SageTV 7 HTPC software is the plugin manager.

Installing, upgrading and even uninstalling plugins for SageTV is as easy as a click of the remote control and in most cases can be done from the user interface of SageTV even on your extender. If there is an update available, it will be noted:

You can then view the release notes, download and install the plugin right from the SageTV 7 user interface:

To see the process of upgrading and installing plugins in SageTV 7 with the new plugin manager check out this quick, 1-minute demo video: 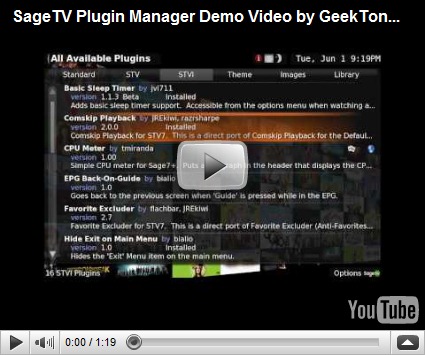 One of my favorite features of SageTV 7 is the new Plugin Manager.  The plugin manager makes installing, configuring and even uninstalling plugins much easier.  And one of my favorites so far is the Movie Trailers Plugin.

The SageTV 7 Movie Trailers plugins is a pretty simple idea, but adds a lot of convenience to the HTPC user.  Once you’ve installed Movie Trailers you can access movie trailers from the TV Program Guide for any movie and from the Videos sections of SageTV.  If you’re browsing upcoming shows on your TV guide and come across a movie you think you might be interested in, but just aren’t sure check out the Movie Trailer.

And if you’re going through a long list of movies on your HTPC, checking out the movie trailer is the perfect way to figure out what that movie really is about before watching it – at least as long as the trailer isn’t misleading that is...

This plugin is simple and very functional.  Check out this quick, 2-minute demo video I created to demonstrate the Movie Trailer Plugin: 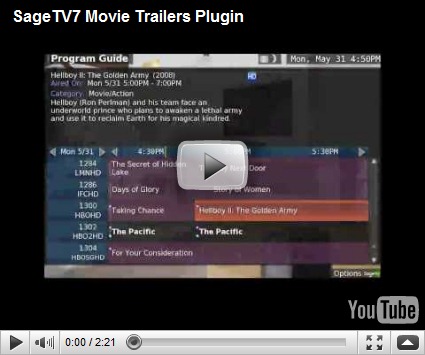 Read more about the plugin at the SageTV Forums.  This plugin was created by koelec & mkanet.

Each week GeekTonic covers the TV scene with a complete listing of premieres, finales and specials for the week.  With Memorial Day weekend in the U.S. the summer season is upon us.  That means a few more finales and a bunch of summer season premieres including Burn Notice, Royal Pains, The Next Food Network Star and more. The 2010 Scripps National Spelling Bee (8pm on ABC – Available in HD) – The top young spellers in the U.S. compete in the final rounds of this years contest.

Six Versus the World (8pm on Discovery – Available in HD) – New RealityTV series.  Athletes travel to Ethiopia for a Suri stick fighting challenge