By: Clift
One of the advantages of SageTV’s latest versatile HD extender, the STP-HD300 over the previous model, the STP-HD200, is the ability to remotely locate the small device and use an external IR receiver. This feature was often cited as a major oversight by some on the HD200. The HD200 is a small device that is just begging to be remotely located. As part of this two part series, I will show how to easily modify the HD200 to add your choice of an IR receiver (within reason). Before we get started it is important to realize that this is a hardware mod that will void your warranty. If, however, you are the owner of an HD200
that is already out of warranty and are still reading, then you’ll want to stay tuned and give this mod a try. That is, provided you feel comfortable modding your darling HD extender and the risks that go along with doing that. 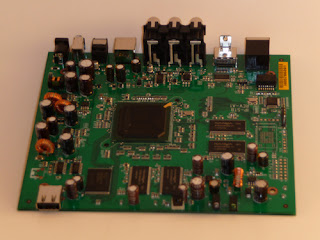 In this first part we will explore some pre-requisite details before performing the mod. In part 2 the execution details and modification steps will be provided. It’s important to know that I have performed this mod on my HD200, so I know it can be done, and that it works. But like all things, your mileage may vary.
Since this is the pre-requisite part of the mod, let’s talk about what we’re going to do, and what we’re not going to do. For one, we’re not going to irreversibly modify the HD200. By that I mean that it will be possible to return to mostly stock. We’re going to open the HD200, solder a lead to the IR receiver trace on the main-board, drill a hole in the back of the HD200 casing, solder the lead to a panel mount stereo audio jack, and finally, install the stereo audio jack.

Tools
To pull this off you’re going to need the following tools:
-A soldering iron. Any basic one will do
-Solder, obviously
-Small Philips screw driver
Parts
You’re also going to need the following parts:
-five to six inches of 3 lead wire. Either purchase something thin with little resistance, or “borrow” some from your stash of computer stuff (and don’t pretend you don’t have a stash…. We all do).
-A panel mount audio jack (search Google, or hit up your local Radio Shack, part number: 274-249).
-An IR Receiver cable. One of the ones you have lying around from that old tuner card you have. It’s probably in your secret stash. Or, you could buy one from the SageTV store – the one they sell for the HD300, ironically.
-(Optional) Some electrical tape. While you’re in there you can FINALLY gag that network activity LED indicator from the inside!

It’s mid-May, lots of casualties for TV series (check this article for a full breakdown of series cancellations and renewals) which means some of the season finales this week are actually series finales.

It’s time – past time actually for this week’s complete listing of premieres, finales and specials for the week. Nearly all of these are finales which is to be expected this time of year.

Storytellers (11pm on VH1) Cee Lo Green is the star on Storytellers this week.  This guy seems to be getting plenty of exposure lately.  Expect him to sing “Forget You” and the Gnarls Barkley song “Crazy.”

Make it or Break it (9pm on ABC Family) Season 2 finale which is also the end of the series.

Dancing With the Stars (9pm on ABC) Season 12 finale