Last week I reviewed the VidaBox iPad Frame – professional-looking iPad wall mount for your high-tech home automation/media setup.  This iPad mount sells for $159 (power adapter extra) but I have the perfect opportunity for you to get one for free for your own home. 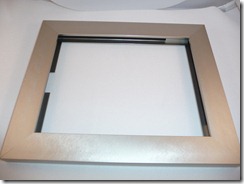 The VidaBox team has agreed to let GeekTonic give the iPad Mount away so you can try it out for yourself for free!

There are two ways to enter with a maximum of one entry per method:

Entry Method 1: The first way to enter is to simply leave one comment below (in this post) with an answer to this question:

“What is the name / initials of VidaBox’s latest iPad charging solution?  And what do the initials stand for?”

HINT:  You can find out the answer to that question at the VidaBox website under “news”.

Thanks again to the VidaBox team for the donated iPad Frame.  I'll pay for shipping to anywhere in the U.S. (if you're farther then that we can work out the difference in shipping cost)  Only one entry per method per person.  The winner will be chosen from valid entries at random Sunday this week and announced on GeekTonic.

Read the full GeekTonic Review of the VidaBox iPad Frame

More reviews and giveaways coming soon so stay tuned to GeekTonic or better yet, subscribe to GeekTonic so you’re sure to not miss anything.

Time for another round of TV Talk.  February arrives with another light premiere schedule this week.  Read on for this week’s complete listing of premieres, finales and specials for the week. Lie To Me has it’s season 3 finale Monday

The Lost Valentine (9pm on CBS) Made for TV movie where TV reporter (Jennifer Love Hewitt) realizes her own life is impacted when she starts working on her Valentine's Day story to report on a woman (Betty White) who still loves her husband who died in WWII.

Who Do You Think You Are? (8pm on NBC) Season 2 premiere