Ask The Readers – What TV Tuners Are You Using?

I’m working on a TV Tuners for HTPC article and need some help from you.  Please tell me in the comments the following:

Thanks for your input!

Not nearly as good of price as the 47” we say yesterday before it sold out, but we do have another decent LCD HDTV Deal – this one at Newegg.

Even though the release of the 4-CableCard Tuner by Ceton continues to be delayed, I know of several bloggers who have installed and are testing the Ceton Quad Tuner right now so it can’t be too far from shipping.  So while you wait CannonPC has made a video with complete instructions on how to install the Ceton InfiniTV 4 Quad Digital TV Tuner for Windows 7 Media Center. The Ceton InfiniTV 4 tuner allows you to record up to 4 HD Digital Cable TV channels at one time! 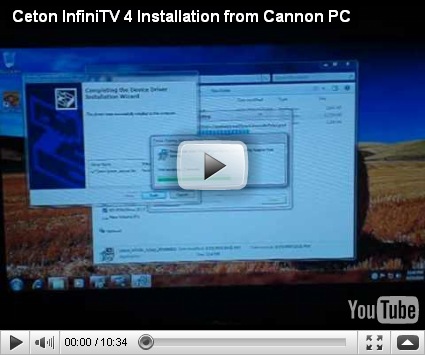 The video was made by CannonPC via

Speaking of ETA on shipping, here’s what Ceton had to say about that as of today:

We're hoping to start shipping units on a first/ordered/first shipped basis in the next few weeks. If you'd like to be notified when they start shipping, you can sign up for the Ceton newsletter at http://www.cetoncorp.com/company_about.php.

Definitely a bummer on the continued delays, but I have a feeling it will be worth the way for you Media Center fans.  Stay tuned for more info.

We’ll call this part 2 of the GeekTonic Deal of the Day.

Not a bad LCD TV set for a very good price.

The Harmony 900 is one of those remotes that are very popular, but not as many folks have one due to the high cost.  Today Amazon dropped the price from the $399.99 list price down to $249.99 plus free super saver shipping.

If you want one, don’t wait long as this is very low for this remote control.

I still haven’t finished my very belated write-up with my thoughts and opinion on GoogleTV.  But I’m interested in your thoughts – do you think GoogleTV is the “wave of the future” or a feeble attempt by Google to push search into TV?

Watch the latest official Google sales pitch for GoogleTV below and let me know what you think: 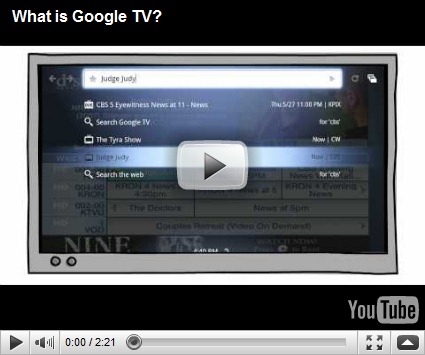 Also, in case you missed it - Read this take on GoogleTV by a favorite SageTV, 3rd party developer of mine.

Email ThisBlogThis!Share to TwitterShare to FacebookShare to Pinterest
Labels: GoogleTV

Head to the SageTV forums for the full changelog and to download.  Hurry now cause the next update can’t be far behind ;)

While watching AT&T and Apple iPhone preorder servers screech to a halt today, Apple took the opportunity to roll out an updated Mac Mini with HDMI, SD Card reader and a shiny aluminum body.

The Mac Mini still looks pretty and now includes the HDMI port it always should have had along with an SD card reader.  So it looks like a very nice option for an HTPC extender doesn’t it?  Well not so fast, while the specs are nice and it would seem to work as a great addition to your Mac-powered HTPC, it also has a few downers too.

What do you think?  Does this look like the perfect HTPC solution for your needs?  Or are you waiting for the rumored to be coming, new Apple TV?

Well the Kindle 2.5 firmware update announced over a month ago is now available for all.  It will eventually auto-download to your Kindle while it’s wireless is turned on, but if you’re impatient like I am you can download it and install it manually using the USB cable. So after a quick download, transferring the file to the root folder of the Kindle and then selecting update, we have Kindle 2.5.2 on the Kindle.  Pretty easy, but obviously more work then waiting for the wireless update. Read on for a full walk-through of the Kindle 2.5 firmware features with lots of screen-shots

How to Remove the Vuvuzela buzz from World Cup with HTPC At the GeekTonic house we watched the US versus England match on Saturday’s World Cup broadcast and enjoyed everything about it except for the annoying Vuvuzela buzz that seems to permeate all of South Africa right now.  I don’t think I’m alone in thinking this “horn” instrument was a very bad idea – just look at a few comments on twitter and you’ll see many agree:

So lets say you also want to get rid of that Vuvuzela buzz, but still want to watch the World Cup games.  Afterdawn has a very in-depth guide on how to do just that by filtering out four different sound frequencies using various programs.  Sure it takes a little work, but it might be worth it for some peace of mind.  And the process is perfectly suited for HTPC enthusiasts too.

Boxee Box Delayed Until November – Why the Extender Matters Remember the fanfare that surrounded the Boxee Box from D-Link?  The Boxee Box is a highly anticipated “extender” of sorts for the freeware HTPC software Boxee and was originally slated to arrive around this time, but the Boxee Blog is now saying the device will arrive sometime November of this year.

The Boxee Team confirmed this weekend that the Boxee Box by D-Link should ship this November in the US and Canada.  The article goes on to say:

“Our vision is to make the Boxee experience on a set top box as good as (and where we can, better than) the one you already know on a PC. The goal is to play HD videos from the web or a local network in 1080p and use hardware acceleration whenever possible. And to provide a TV browser experience that can handle almost everything you throw at it, including Flash 10.1. Not to mention making all this happen for an affordable price and on a quiet device that will not feel obsolete 12 months after you buy it.”

It’s obvious the hardware extender by D-Link is a key component of Boxee’s future and the competition in the extender/media-player world won’t be getting any easier either with the GoogleTV platform officially coming soon and possibly an update to AppleTV as well.  Boxee needs the D-Link hardware to be a big hit – not always easy with a first-time hardware device.

Why the Boxee Box is Important:

Boxee prides itself with being very internet-connected.  It’s not really TV tuner-based at all which is quite unusual for a HTPC program.  It’s fairly popular with the techy crowd right now, but to make Boxee push the envelope to the masses and make the investors happy they really need to access more eyeballs to continue working out content deals and therefore advertising that will bring in the revenue.  We’ll be watching this holiday season to see what is delivered – just know this:  The success or failure of Boxee quite possibly hinges on the popularity of the Boxee box at launch – especially with a holiday release.

The Other Interesting Part of the Story – the Remote One of the more popular freeware, open-source HTPC programs has always been GB-PVR.  The HTPC program offered a free alternative to HTPC enthusiasts.  This weekend the developer of GB-PVR announced the long-awaited, next generation of his HTPC software – N-PVR.

Here’s the announcement from the developer:

This is a big release with lots of changes. I've had to make changes to some stuff that was holding GB-PVR back, and along the way I've broken all the plugins and skins etc.
In the beginning of December I started rewriting GB-PVR from scratch. I did this for a variety of reasons. A few of the most important reasons include:
- problems with legal ownership of GB-PVR codebase
- many things in the architecture didn't work well, but were impossible to change in the existing framework without major pain for users
- hack upon hack were added over the years as application evolved from a single tuner analog application to a multi-tuner analog/digital application
- millions of odd little rules users had requested over the years, that I no longer understood fully. This made the application fragile and prone to breaking stuff when I made small changes. (yes, you'll probably be annoyed that your specific rule is no longer there)
- and a pile of other stuff...
Sticking with my crappy naming ability, the new application is called N-PVR (short for 'next pvr').
This is a lot of change, and its still rough in places, so should be considered a public beta. Fortunately, its an entirely different application, and can be installed on the same machine as GB-PVR 1.4.7 for you give it a test drive.
I also have to say a big thanks to the testers, who have suffered through this big change from its very feeble early builds, and given me a lot of help along the way.

The new user interface is very similar to GB-PVR. For a complete list of changes, more information on installing and download head to the N-PVR forums