Not long ago when a book was published with a mistake or revision no matter how small, your printed book was stuck with that mistake.  With e-books you have the ability to “update” your copy of the book whenever a book is updated.  If you happened to purchase Steve Jobs, by Walter Issacson in Kindle format from Amazon you’ll likely experience this yourself.

Saturday I received an e-mail from Amazon informing me of an updated version of the e-book with image and caption layout corrections.  Amazon doesn’t automatically push these updates to your e-reader.  Instead they offer you a chance to “opt-in” for the update via e-mail so they don’t mess up your bookmarks or anything else.  The other reason is so they aren’t “messing” with your e-book library without your permission.

Here’s the message I received from Amazon notifying me of the update: 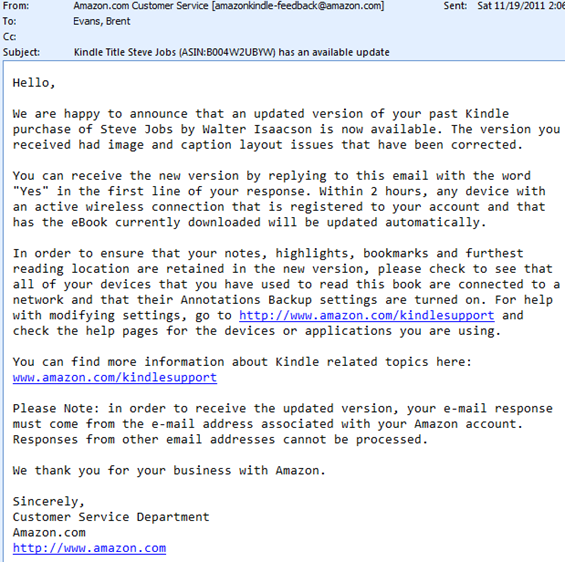 For a book that is addressing a current event-type of topic this feature could be very useful as the author could ensure the content doesn’t become stale.

Sweeps month ends Wednesay this week.  And then Thanksgiving arrives in the U.S. so not a lot in the way of premieres coming your way.  Still there is a little activity on the TV set.  Read on for the GeekTonic weekly TV update highlighting all the new premieres, finales and specials coming up this week.

You Deserve It (9:01pm on CW) New game show series

Dancing With the Stars (9pm on ABC) Season 13 finale

Looking Toward Home (10pm on PBS) Documentary with modern-day Native Americans who have left the reservation for life in the big city.

I Heart Radio (10pm on VH1) A music festival at Las Vegas with Black Eyed Peas, Coldplay and more.

A Very Gaga Thanksgiving (9:30pm on ABC) A musical special with none other than Lady Gaga.  Cmon, what says Thanksgiving more than Gaga?!?

Tyler Perry’s For Better or Worse (10pm on TBS) New sitcom series based on Tyler Perry's films Why Did I Get Married?, Marcus and Angela must deal with the problems of married life.

Real Deal (9pm on History) A new documentary series which follows the interactions between buyers and sellers of collectibles of all kinds. Antiques and collectibles can be an extremely valuable and complex market, with all parties trying to make a profit and own a piece of history.

One Born Every Minute (10pm on Lifetime) Season 2 premiere