So if you’re experiencing the IR blaster problem head over to Hauppauge to get the driver update.

(read more about it here) for your HTPC setup now for $169.99 with free shipping and unlike the Buy.com deal from earlier this week - no rebates required

A great deal if you’re in the market for a HD-PVR to use with your HTPC or to record video game play.

It was just over a week ago when N-PVR was introduced as the next generation of the popular freeware HTPC software formerly known as GBPVR.  Today an update, N-PVR 1.5.21 beta is available for download with many bug fixes and improvements.

Some of the changes include:

More information about the N-PVR upgrade, full changelog & the download is at GBPVR forums

MediaPortal, one of the more popular open-source and free HTPC software programs released the 1.1.0 (release candidate 5) version of MediaPortal 1 this week.

The beta version of 1.1 was released last August with many updates.  This RC5 version should be the last one before officially releasing the 1.2 version. Western Digital’s WDTV media streamer has been one of the more popular media player devices over the past year and just recently introduced the next generation of that player, the WDTV Live Plus.  ZatzNotFunny! has a full review of the device worth reading if you’re interested in media players.  Here’s a few excerpts from the review:

I’ve been looking at WD’s lineup for some time and finally decided to pick the newest rev up. It can stream 720p, 1080p video content and Netflix – the main things I am looking for. It also supports streaming popular media codecs and enclosures. Here’s the list supported file types:

The player includes optional WiFi support for these cards and now includes Netflix streaming which is a very nice-to-have feature for a box in this price range:

By comparison, Netflix streaming was great. You need to register the device with your Netflix account and then after that you are good to go. The interface is the similar to the one found on the PS3. And the WD TV also steams Pandora Internet Radio and Flickr.

Check out the full review of the WD TV Live Plus at ZatzNotFunny!

I’m always on the lookout for cheaper storage for my HPTC setup and today noticed what looks like the cheapest price on a 2TB drive yet – TigerDirect (affiliate) has the Seagate Barracuda LP HD 2TB SATA 3Gb/s Internal Hard Drive for $79.97 (109.97 less $30 mail-in-rebate)  This includes free shipping.

I’m not a fan of mail-in-rebates, but this is still a pretty good deal for this OEM drive.  Deal expires July 2nd.

Many Microsoft Media Center users are familiar with Big Screen Global for several popular Media Center Vista add-ons.  Since Windows 7 has released, they have been working on Big Screen EPG which is being officially launched as a release version and ready for download and purchase. Some of the core features Big Screen EPG brings users include : For more information, read the full press release and then head over to the Big Screen Global Website

Microsoft pushed out a Microsoft Cumulative Update for June 2010 with some new Windows 7 Media Center updates.

The update is available now via Windows Update.

Read the entire changelog at Microsoft.com

If you follow me on twitter you likely know I’ve been reviewing a Sonos setup for whole-home, wireless music.  The free iPhone (and iPod Touch) app that controls Sonos is one of the things that makes Sonos an easy device to love.  But I’ve been thinking of how nice an iPad app would be with Sonos given the extra real estate you have with an iPad and the fact that you’re likely only going to be using your Sonos in the house.  Well today Sonos announced they are doing just that and should have a new Sonos Controller for iPad available in the iTunes App Store sometime late August. The Sonos Controller for iPad will include the following features:

Not sure what it’s all about?  Check out this video demo promo by Sonos: 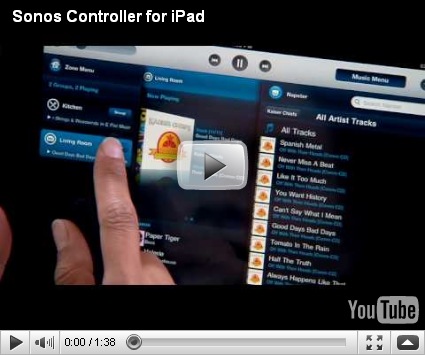 The Hauppauge HD-PVR, a HD capture device for nearly all HTPC software programs is on sale at Buy.com (affiliate).

Buy.com has the Hauppauge HD PVR 1212 component capture device (read more about it here) for your HTPC setup now for $169.99 after rebate with free shipping

A great deal if you’re in the market for a HD-PVR to use with your HTPC or to record video game play.  Next best price is at Amazon for $185

iOS 4 Walk Through for iPhone – With How-to

I was able to download and install my iOS4 update to my iPhone 3G in a matter of 30 minutes or so.  My next step was to answer the question: how do those new features work?

I first checked the Apple website which talked about the features, but didn’t exactly tell me how to use them – you know the quick, “dummy’s guide.”  So after checking out a handful of articles about iOS4, I found a great one with screenshots at Tipb.com.  I’m most interested in the limited multi-tasking, folders (thank goodness – finally!) and the long awaited unified email which I needed in a bad way.  I won’t bore you with the details, but check out the walk-through if interested – it’s a good one.

Note: their server is getting hit pretty hard today so here’s the cached link if you can’t get through Well that didn’t take long after all.  After the new Nook pricing and Wi-Fi only version, Amazon today dropped the price of the Amazon 6” Kindle by $70 to $189 with free shipping!  It was just this morning I was comparing prices of the 2 Nook versions with the Kindle and concluded this:

Take that along with the competition from the iPad and Amazon should see its Kindle sales drop quickly without a significant move on their part.

This month’s episode of HTPCentric covers what I consider the difficult part of Home Theater PCs – the hardware.  Video Cards, CPUs, storage and more – oh my!  Another must-listen podcast in my book so don’t miss it if you’re a HTPC enthusiast.

This past March I mentioned that I expected Amazon to drop the price of its popular Kindle eBook reader soon after the Apple iPad arrived and I even had a suspicion that Amazon would release a cheaper Wi-Fi only version of the Kindle.  Both would be great moves to keep Amazons eBook store ahead of the competition.  But to my surprise, Barnes & Noble has moved ahead of the pack with those exact moves and made it official today.  I first heard about the B&N moves from Len Edgerly on Twitter which were then confirmed by Dave Zatz. A new Wi-Fi only nook is now available for $149 and the 3G/Wi-Fi Nook costs $199 versus the 3G-only Kindle which is still selling for $259.  As much as the GeekTonic family loves their 2 Kindles, it’s going to be pretty difficult for Amazon to justify that $60 price premium over a more, fully-featured Nook let alone the $149 wi-fi Nook.  Take that along with the competition from the iPad and Amazon should see its Kindle sales drop quickly without a significant move on their part. BrainSurge (6pm on Nikelodeon) – Season premiere of the kids gameshow.

Ultimate Car Build-Off (9pm on Discovery – Available in HD) – New reality series.  The first episode starts off with Hollywood Hot Rods and Pure Vision given 4 days to turn a mini-van into a supercar to be raced at Willow Springs Raceway.

Unforgettable: The Korean War (10pm on PBS) – A special where U.S. veterans recall their part in the Cold War-era conflict

Heartland Thunder (10pm on Discovery – Available in HD) – New reality series where 4 Dirt Modified racers battle it out at 120 miles per hour.

Inedible to Incredible (10pm on TLC) – New reality/cooking series that is sort of a “What Not to Wear” for food.  In the first episode they make bizarre dishes inspired by a childhood in the arctic region of Canada.

Unusual Suspects (10pm on Investigation Discovery) – New documentary/mystery series where they focus on some of the more challenging mystery cases in modern-day America.  First episode is “A Mother’s Conviction” where a mother of a young boy is convicted of murdering her son and years later is set free by a confession from an unexpected source.

Downfall (9:01pm on ABC – Available in HD) – New game show series where players answer questions in hope of winning prizes up to $1 million.  This first episode is played on the roof of a downtown LA high-rise while contestants attempt to answer questions beofre time is up.  Faxes of prizes on a conveyor belt with cash ($5,000 - $1M) at the end of the belt go by as players try to answer before the prize goes over the edge of the building.  Hmm.

Harp Dreams (9:30pm on PBS) – A new documentary focused on the triennial USA Intl. Harp competition.  Lots of harp music if you’re into that sort of thing.

Rookie Blue (9pm on ABC in U.S. & Global in Canada – Available in HD) – New crime drama series on ABC.  A group of young, rookie police officers must learn to adapt to their jobs and meet the expectations of their friends, families and co-workers.

Boston Med (10pm on ABC – Available in HD) – New documentary/health series on ABC filmed at Massachusetts General, Brigham & Women's, and Children’s Hospital Boston.  The focus is on the lives of the doctors, nurses and patients at these hospitals.