As we move into mid-October, a few more premieres arrive although not many notable ones.  Matter of fact there have already been a few cancellations from this season’s crop of new series including “H8R”, “Free Agents”, and “Playboy Club.  One that has been picked up for the full first season is “New Girl” with Zooey Deshanel although the 3rd episode that was slated to air this Wednesday will go on hiatus until November 1st thanks to those crazy network execs who decided last minute to show expanded segments of “The X Factor” along with the Major League Baseball Playoffs and World Series.

Be sure and check out the GeekTonic 2011 Fall TV Season premieres guide which highlights all the new shows and provides a detailed listing of all TV premieres for the Fall and early-winter TV season. 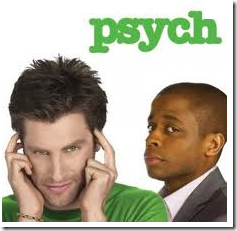 Psych returns to USA this Wednesday for it’s sixth season

Work of Art: The Next Great Artist (9pm on Bravo) Season 2 premiere