SageTV Remote for the Palm Pre

Are you one of those lucky people that has the PalmPre smartphone  AND the SageTV HTPC software?  If you are you’ll want to check out this new PalmPre app that brings the SageTV web interface into the PalmPre.

The SageTV Remote app for the Palm Pre is a “front-end” to the SageTV Web Server.  It allows you to use your Palm Pre to control your SageTV HTPC just like a remote control.  There are no streaming functions yet at least but it definitely looks slick on your Palm Pre phone… Read more and get the download at the precentral.net forums 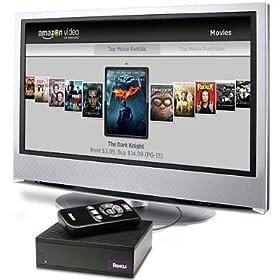 If you’re interested in the Roku – that little box that plays back Netflix, Amazon VOD and other online video content to your TV, you might want to check this deal out.

Amazon (affiliate) has the Roku for $89.99 and free shipping.  This is a refurbished unit (has 1yr warranty) but a good price.

For other media gadget deals follow GeekTonicDeals.com.  Here’s a few recent deals from that site:

Kindle for the PC

I’m definitely a fan of the eBook Reader devices.  If you’re one who reads many books you’ll want something that’s easy on the eyes – you know, like paper.  And e-ink is really the way to accomplish that since unlike LCD screens it doesn’t strain the eyes.  But there are those times when it’s nice to “extend” your book to other devices.  My wife has used the Kindle app on her iPhone to continue reading a book she’s been reading on the Kindle during times when she’s stuck waiting in line for example.

Today Amazon and Microsoft announced a new Kindle app that lets you extend those Kindle books a little farther – on a Windows PC.  Beyond adding yet another device you can access your Kindle eBooks on, this app adds a few additional features to note including multitouch capability and color.  Here’s the feature list mentioned on Amazon.com:

Why is this a really big deal?  I’m glad you asked.  This will allow the Kindle books to work on TabletPC’s sporting Windows 7 and multi-touch.  Not for me, but I know a lot of you want a multi-purpose computing device that also functions as a usable eBook Reader.

Here’s a nice hands-on look I found on Appscout.com

Well that didn’t take long.  Kindle’s first move after Barnes & Noble Nook announcement is to drop the cost of the “international” Kindle to match the Kindle 2 price of $259.  It only makes sense to make the two the same price and honestly they should just make one Kindle 2 that does it all anyway.  Not really a positive for Sprint since the international version sports an AT&T radio instead of the Sprint radio.

I expect to see more of a response from Amazon in the next few months – more price drops and probably features to match the Nook’s current advantage.  Don’t expect much though until Amazon see’s how the Nook really compares in real life.  But if the Nook reviews are on the positive side Kindle will definitely have some responding to do. Those of you who follow me on GeekTonic know that I spend a lot of time with HTPCs, Media Players and all gadgets that can play back media.  When Syabas announced the new Popcorn Hour C-200 I was intrigued.  From the specs it was clear that this device came to the party prepared.  It touts the ability to play back a multitude of different media file formats and it comes in a sleek-looking set-top device as well.  So how well does this new Popcorn Hour C200 perform?  Read on to find out.

I’ve used the earlier version of the Popcorn Hour A-110 a little and have used the SageTV HD Theater as a media player (it works as both media player and/or full-blown HTPC), but until now have never seen a media player with as much promise and capability in the hardware department as the PCH C-200.  I had a short post up when my review unit PCH C-200 arrived and originally planned to have the review out shortly after that, but I ran into a few bumps – partly due to firmware update issues and partly because of a rough patch in my schedule.  Regardless I have a lot to share about this incredibly media player and a lot of information you’ll find useful when deciding whether this is the one for you. Amazon has released an update to the free, iPhone Kindle eReader app.  Nothing mind-blowing here, but for those of you who use this app regularly (yes this includes my wife) check out the list of updates:

If you’re still using 1.0 you might notice the updates from 1.1 too:

CableCard and SageTV Sittin’ in a Tree

One of the things Microsoft has had over competing HTPC software makers was the CableCard tuner which allows native tuning of all digital CableTV content whether it is encrypted or not.  Yes you can do this with the Hauppauge HD-PVR as I continue to do very successfully, but CableCard doesn’t require you to have a separate, set-top Cable Box.  The problem till now has been that CableCard only works on Microsoft Vista Media Center and Microsoft Windows 7 Media Center.  SageTV, BeyondTV and the other HTPC software programs have been left out of the CableCard party.   Well thanks to Andy Van Till, the developer known for DVRMSToolbox, FWChannel Proxy and many other HTPC apps for Media Center and SageTV we just might have that CableCard solution for SageTV.

Until this year CableCard really wasn’t that enticing to most SageTV users, but now with “relaxed” restrictions for CableCard, interest definitely has increased.  How is Andy getting CableCard to work with SageTV you ask?  Well in very basic terms, he’s created an app called SageMCTuner (named from Sage + MediaCenter + Tuner) that turns Windows Media Center into a Network Encoder – for simplicity’s sake think of it this way:

SageMCTuner turns Windows MediaCenter tuners into just another tuner for SageTV so that SageTV can access those CableCard tuners to record content and watch LiveTV.

How SageTV Tunes with CableCard Tuners

Based on Andy’s Blog Post about this here’s the basics of what happens behind the scenes to make all of this work: All of those details don’t really matter to most of us as long as the end result is a painless, trouble-free way to record with CableCard tuners in SageTV.  I first caught wind of Andy’s work on this when he tipped us off in this blog post.  This week he posted what he’s calling an “experimental release” where he’s hoping to find people who have CableCard tuners with the “relaxed” firmware, Windows Media Center AND SageTV so he can get some testing of this work and perfect it.  Even EngadgetHD caught the importance of this and posted a write-up about it.

If you’re interested in trying this out and helping Andy test it, don’t wait – head over to Andy’s babgvant blog to read more and get the download.  And don’t forget to let us know here at GeekTonic how it goes!

The “nook” ebook reader arrives from Barnes & Noble and you can pre-order one today.  Here’s a few quick facts about this new eReader:

What You Get with Nook Purchase: As a fan of the Kindle 2, I’m intrigued.  So intrigued I’m planning on reviewing one in November…  Things I see that are weaker compared to the Kindle:

Obviously this doesn’t put the price at $150 or $99 like many GeekTonic readers have said needs to happen before they’ll consider biting.  But it does provide some very powerful competition that the Kindle frankly didn’t have until now in my opinion.

If you would like more information on Nook or are ready to pre-order head over to the Barnes & Noble Nook Website.  Those who pre-order now get a free copy of Malcolm Gladwell’s “The Tipping Point” book

I’m late with the TV Premieres guide this week, but since Sunday through Tuesday don’t have much exciting to talk about I think that’s okay.  We’re now into that period of the TV season where few new premieres are popping up.  Fortunately for us there is a gem here and there worth checking out – this week from USA. White Collar premieres Friday on USA–I expect this to be another great “formula” Drama from USA
NOTE: All Times are Listed for EST