Microsoft spent the week pulling surprises out if its giant hat this week with a couple of significant announcements.  The first one was a positive – embedded Windows 7 for CE devices which holds some promise – especially for Media Center fans.  The second a total disappointment albeit not an entirely shocking one where they admitted their awesome, courier Tablet PC concept was just that – a concept that will never see the light of day.  Since I’m a bit ticked about the courier announcement, we’ll focus on the positive, embedded PC concept today.

The biggest tech news sites have sort of glossed over the announcement, but don’t for a second discount this one.  Microsoft has unleashed an embedded version of their hot-selling Windows 7 operating system to be used by OEMs in consumer electric devices such as TVs, set top boxes, DVD/Blu-ray players etc.  If this sounds a little Linux-like to you, you’re not crazy.  Embedded W7 is targeting Linux front-on since you can find Linux in many CE devices today – especially those things like set-top-boxes, TV firmware, DVD and Blu-ray players and HTPC extenders.  And because Microsoft included Media Center in the embedded W7 mix this is definitely a big deal.

Microsoft has been calling the embedded Windows 7 project by the codename “Quebec”.  But starting this week it will be known as Windows Embedded Standard 7 (yeah, that’s a better name isn’t it…).  It will only be available to OEMs – original equipment manufacturers so you and I won’t ever get our hands on it directly, but we will likely see versions of it on some electronic device we purchase in the future.

On Microsoft’s WindowsEmbedded 7 Site, you’ll find Media Center as one of the main features available to CE manufacturers:

This is a significant shift for Microsoft who for quite a long time has been touting Media Center as “TV on your PC.”  A saying that seemed to mean the company didn’t really care about getting MediaCenter to the TV – but instead “to the PC.”

The lack of a viable HTPC extender for Media Center except for the XBox 360 continued to hold Media Center back from its potential.  Many who might even consider HTPCs simply did not want to put a computer next to each of their TVs.  In the meantime the small niche company, SageTV produced two of the most fully-featured and useable HTPC extenders ever – the SageTV HD100 and HD200 Theater.  This along with some features Microsoft was unwilling to allow enabled SageTV to hold its own against the behemoth Microsoft who just seemed to be hanging around to see how things go with the Media in the living room concept.

Now that Windows 7 has proved to be a success and Media Center improved on many of the problems of earlier versions of Media Center, it appears that Microsoft is again ready to push its dominance into the living room.  Tuesday, Windows 7 Embedded was released to manufacturing with the intent to put Windows 7 into CE devices and in many cases into everyone's living rooms one way or another.  Time will tell whether Windows 7 Embedded will convince CE manufacturers to give Media Center another chance.  Mediaroom seemed to get all the attention from that same audience at CES earlier this year so Microsoft seems to hope Windows 7 will get its due now as well.  I hope to see Media Center embedded into TVs, Blu-ray players and even set top boxes eventually.  If Microsoft succeeds at this and the implementation isn’t crippled too much, they’ll be a force that will give the TiVos of the world a very, very difficult time.

Here’s a video by Microsoft to tout the features of Media Center to manufactuerers who might be interested in Windows 7 Embedded: 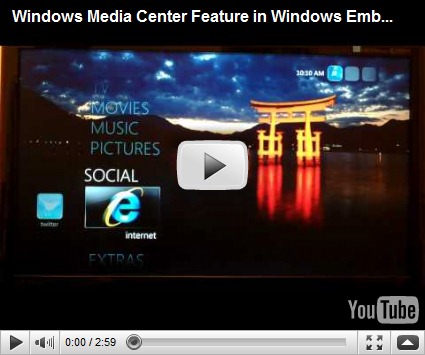 Note that Microsoft seems to be open to allowing CE manufacturers to customize the software a bit to their own liking.  Allowing branding and special features to be included as desired within reason.  This could be a draw to Windows 7 Embedded over some other options available to CE manufacturers and Windows 7 MC definitely has the polish already built in that would be very attractive to them as well.  The negatives we might see as consumers – or more likely enthusiasts might be crippled features, less flexibility etc compared to the full-fledged HTPC implementation.  But for the masses, a well implemented CE device could be the perfect thing to bring Media Center into the eyes of the not-so-technical public.  The success or failure of this concept will likely be a result of which manufacturers buy in to the concept.  Time will tell.

More on the Microsoft Embedded Project