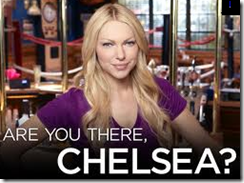 Are You There, Chelsea? Premieres Wednesday on NBC

Are You There, Chelsea? (8:30pm on NBC) New comedy series based on the semi-autobiographical book by Chelsea Handler.  Starring Laura Prepon and Chelsea Handler.  But it will be Prepon playing Chelsea, not Chelsea.  Got it?

I Cloned My Pet (9pm on TLC) a new reality series

The Finder (9pm on Fox) New drama series.  This is a spinoff of the popular series Bones that will star Geoff Stults who plays a military-trained guy who finds people no one else can in the Florida Keys.

One Life to Live (2pm on ABC) And then there was one – MrsGeekTonic has gone from three daytime soaps to one, General Hospital.  ABC began this soap in 1968 and finally puts it to death on Friday the 13th!

Fringe (9pm on Fox) Okay it’s not a premiere, but it’s back – and that’s enough reason for me to put this one on the list.

Extreme Makeover: Home Edition (9pm on ABC) this season 9 finale finishes with part 2 of the Joplin Tornado Families episode.  This will be the series finale as well

Napoleon Dynamite (8:30pm on Fox) New cartoon series based on the movie by the same name