This review of the Barnes & Noble Nook e-Reader is coming from a self-professed Kindle lover!  I had a difficult time working myself up to writing this review.  Brent suggested that I go back and look at what I said in my review of the Kindle to use that as a starting point.  Well, I’ve done that and unfortunately it didn’t help much since at the point I reviewed the Kindle I had never even seen or touched anything like an e-reader.  My perspective has shifted considerably since February and I now feel like an e-Reader pro.

Note:  This is a guest post by Shelly (Mrs. GeekTonic), the non-geek in the family ;) Shelly, my lovely wife collaborated on the GeekTonic Look at the Nook review from the Geek’s perspective. She bypasses all technical jargon and gadget love that I give the Nook. Instead she focuses on the most important aspects for the hard-core book readers out there.  Are you someone who couldn’t care less about the latest “gadget” unless it serves its primary purpose and works the way it should?  This is your review.

Since the device itself was delayed in its delivery I will begin with the iPhone app.  Originally, with the Kindle I wasn’t sure that I would ever use the iPhone app with its small, non-eInk screen, because the Kindle was small enough to fit in my smallest purse when I needed it. Then one day I forgot that I had a doctor’s appointment and had to go directly from work and was then stuck in the waiting room for an hour or so.  As luck would have it, the iPhone was right there and ready to go.  The Nook iPhone app has lots of personalization options available.  The iPhone font size choices are “cute” but not all that useful  (small, medium, large-ish, large, huge and gigantic.)  The Kindle’s fonts are set up Aa Aa Aa Aa Aa  You can see what you are getting.  There are also color choices on the Nook app available too, but I find them distracting and one of them completely unreadable (it gave me a headache). Worse, when testing the syncing between the two devices the Nook app failed.  First of all you have to exit out of the book to find the sync icon (DUMB!).  Secondly, if you sync from the Nook to the iPhone forget it… it will sync from the iPhone to the Nook, however (Ummm, ok.).  There is one advantage that the Kindle does not have, however.  The Nook gives you the ability to search by chapter.  If I leave my Kindle in the wrong part of the house (or if I turn off wireless my to optimize my battery) I may not get a very good connection and my iPhone sync may not find its way to the last read page.  For instance, today it was at least two chapters off which could have been easily remedied by a chapter search like the Nook iPhone app has.  Instead I had to page forward (annoying).

One cool feature of the Nook iPhone app was there is a scrolling feature that moves the text up for you.  However, it moves VERY slowly and I never did find a way to adjust speed control.  I am a very slow reader and l thought it was too slow.

Long story short – the Nook iPhone App needs serious work…. They spent too much time and energy on stuff that just doesn’t matter (colors that are hideous for reading) and not enough time on stuff that matters (making sure sync function works).

THE NOOK – The Actual e-Reader Device

Size – The e-Reader is slightly smaller than the Kindle in width and height, but not as thin (due to the removable battery) and therefore not as light.  I put them both on my weight watchers scale and we are talking about 2 oz. but to me it was quite noticeable.  The screen however, is slightly larger as the frame is narrower.  The Kindle could make strides in this area.

Wake up from blank screen (not screensaver mode) takes FOREVER!  This is not just a perception.  I actually timed it after Brent posted his review.   One minute and eighteen seconds to start up! Are they kidding?  I would have read a couple of pages by then on the Kindle (remember I read slow).  The wake up from blank screen on the Kindle was 3-4 SECONDS!  Only 1 second longer than from screen saver mode.

Touch screen at the bottom will take getting used to for an iPhone user.  I want to touch the WHOLE device not just the bottom. After a couple of days my hubby (a Blackberry user) was doing it too.  It makes me wonder about the logic in a partial touch screen concept (is it just me?)  I find myself touching the Nook home button a couple of times before it notices that it is supposed to do something and the scrolling on the touch-screen is also not very responsive.

Home (or the Nook button) brings up your touch screen. 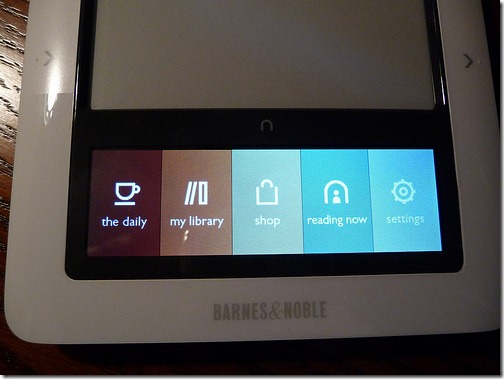 They need to make each button on the menu a little smaller to include 1 more button for the audio player on each page.  I heard this complaint on another review and while it doesn’t bug me since I have an iPhone and iPod with me at all times it does make sense.    It is an option if you open any of the other choices so it should be on the main menu.

Changing font is a nice feature.  Some fonts are just more pleasing to the eye than others and that is an individual choice.  Text size options are listed by word not size as they are on the Kindle therefore you have to actually select it and see how it looks to decide.  (see above with the app review)

The e-ink darkness appears to be a little bit darker on the Nook, but when I was listening to an old podcast from when the Kindle2 came out, the Kindle1 folks were complaining that the K2s (now know as “the Kindle”) screen was too light.  Sounds like it is a K2 problem to me ;)

Shopping in the B&N Nook store was not my favorite experience.  On the Kindle, I can type in the author’s last name and get what I want.  When I typed in “Viets” (an author’s last name) in the B&N store I got everything from Vietnam and very few “Elaine Viets” books.  What I did like is that from the list of results on the Nook store it shows the price.  In the Kindle store you actually have to select the book to find out the price.

Sometimes I will download a sample of a book to decide if it is something that I want if it is a new author or series.  The sample from Barnes and Noble was less than a page.  I was completely taken by surprise when I got to the end of the sample.  How am I supposed to know if I want to buy the book after 2 paragraphs?  The same sample on the Kindle was 2 chapters.  It appeared to be 40 pages, but that included the title page, table of contents (not included in the real book) etc.  When the actual content started it was literally less than 1 page.  BOOOOOOOOO!

Book sharing on the Nook is a great idea!  The rules are pretty strict though.  I don’t always finish a book in 14 days… ok, I almost always do, but my husband doesn’t. (You will have to read about this feature in Brent’s review because he actually tried this feature out as well as downloading a library e-book). The Kindle does not have any type of sharing option though.  You can have more than one Kindle on the account, but you would only want to share an account with people IN your household.  The Nook allows you to share books with folks not on your account.  Amazon will need to find a way to do this to keep me happy.  If we were to buy my daughter (19) a Kindle now, she would be on our account, but when she moves out……  Not buying her books forever, but we do read similar things and it would be nice to share some books with one another.

Another Nook feature that would appeal to people like my daughter – people happy to spend a day away in a comfy chair in a B&N store with a frappaccino in their hand is the ability to read books utilizing wi-fi in the store for free (rumor has it this is not working yet). [NOTE: The In-Store Wi-Fi free reading is supposed to go live some time in January but will be limited to one hour per book and only those books approved for the service by the publisher]

On to the nice, but doesn’t really matter category….

Book Cover View – to me this is like (sorry honey) dvd cover view on the Sage TV movie stuff (yes that is the technical term).  I could care less about this.  My daughter would like this though – she actually wrote a research paper on choosing books based on their cover (former marketing major).

Screensavers – you have the authors just like on the Kindle, but you also have cityscapes, and nature-scapes.  You can also create your own using. jpg image format

Previous page button on both sides – I really don’t use it that often, but when reading in bed (one handed) it is nice to not have to shift around.

Brent was a little disappointed with my initial review because it doesn’t go into a lot of the Nook’s geek features.  But the reality is this:  I use my Kindle to do one thing…  Read books….  It does other stuff?  Who knew?

He was talking about how he missed the “back button” on the Kindle and my response was “I have never used it and I have no idea what it does.” And then I was listening to a podcast he did and Len Edgerly mentioned how he missed the “back button” too.  Now I feel silly.   The buttons available on the Nook are perfect in my opinion.  I don’t need a joy stick, back, menu AND home button if the Nook (home) button pretty much does all of that.  As long as the page turns… I am good!

Do I think others like me (non-geeks) would be okay with a Nook e-reader?  Yes, they would probably do fine with the Nook.  But ultimately I think the Kindle is better at the things we find most important in this sort of device – finding and reading books.

I don’t read magazines or newspapers (newspaper paper makes my skin crawl) now so I doubt that I will start because they will be available on the Nook or the Kindle. (I did have the Kindle read the Wall Street Journal to me once using the text to voice option (not available on the Nook) while I was cooking – It doesn’t know how to pronounce Obama.  It made me giggle.)  Podcasts?  Yeah, I listened to my very 1st one this week, because my husband was on it and they talked about me (my ears were burning).  So I don’t need my book to offer them.  I don’t need to “hack” my book (not that I could).  I just read books… THE END

Thanks to Shelly for this review - I really appreciate her input and hope to see another guest post on GeekTonic sometime in the near future.  If you have any questions about the Nook or Kindle e-readers for Shelly feel free to ask in the comments below.
at 12/17/2009 09:29:00 AM