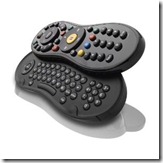 This week TiVo launched their full QWERTY TiVo Slide Remote Control they demonstrated earlier this year.  I’m intrigued by DVR remote controls that keep that same familiar remote look & feel but add the QWERTY keyboard for typing in searches and other alpha character fields in the User Interface.  Dave Zatz '>demonstrated the bluetooth remote at ZatzNotFunny!

Note correction from Dave Zatz from the comments:  It's both Bluetooth and IR. So you can control your television (power, volume) in addition to controlling the TiVo 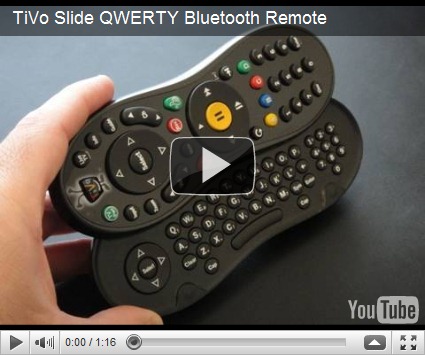 The TiVo Slide Remote doesn’t use Infrared like most remote controls.  Instead it connects via Bluetooth with a USB dongle that attaches to TiVo Premiere and Premiere XL units, TiVo Series3, TiVo HD, and TiVo HD XL DVRs.  You can get it at Tivo’s website, Best Buy stores and Amazon for $89.99

I like the looks of this remote and covet it about as much as the not-yet-released, Boxee Remote Control.