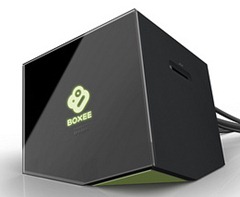 The first reports of people receiving their Boxee Box started yesterday right after the Boxee Event.  Boxee wants to play with the big boys like GoogleTV and AppleTV and announced Netflix support coming “this year” and Hulu Plus

Thursday Boxee officially unveiled their Boxee Box, a non-PVR HTPC streaming, set top box built by D-Link.  The big news in the announcement was that shipments have begun already (many have already received theirs) and Netflix & Hulu Plus support is on its way.

The Boxee Box is built on an Atom-based platform much like Logitech Revue GoogleTV.

iFixIt had a teardown of the Boxee Box on launch day (check out the teardown at iFixIt here.) Boxee seems to have given in to the fact they can’t get official content support and still allow things like unauthorized streaming of Hulu and torrents – things that make those content providers edgy.  And so they seem to have worked out agreements with Netflix for official support on the box before 2010 ends (we’ll see if they’re able to meet that promise) and Hulu Plus sometime soon (read: Hulu deal isn’t all worked out yet so I say 2011).  Both great additions, but similar to many other devices by the time they get both of those providers online.

I see the Boxee box as a great alternative to the AppleTV and GoogleTV if your focus is on video content on your local network and streaming content available on Boxee.  I’ve decided to hold off on reviewing the Boxee Box for now though – perhaps if they add TV tuning at some point…  We should see a full review at ZatzNotFunny! before long though.

You can order a Boxee Box at Amazon now for $199

Did you get a Boxee Box?  Let us know how you like it in the comments!