The month of August is a month of summer TV season wind-down and these next two weeks are mostly packed with season finale’s for the summer shows.  I’ve been working on the 2011 Fall TV Season premieres list which should be coming in by the end of this month on GeekTonic.  For now read on for the GeekTonic weekly TV update highlighting all the new premieres, finales and specials coming up this week. 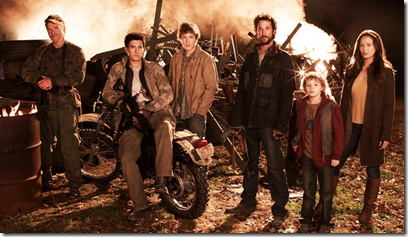 Falling Skies (10pm oon TNT) Season 1 2-hour finale.  Yes it was picked up for a second season.  While some sci-fi fans have been complaining of too much character background stories and not enough aliens and action, this series had cable TV’s top series launch in terms of viewers so far in 2012.

Hillbilly Handfishin’ (10pm on Animal Planet) New animal/nature series where people from around the world travel to Oklahoma to try noodling, where they go into deep, murky waters to catch catfish with their bare hands and feet.

Strike Back (10pm on Cinemax) New drama/action series where an American, ex-Delta Force operative works with the British military to stop terrorists.

Ryan and Tatum: The O’Neals (10pm on Oprah) Season 1 finale

The Lying Game (9pm on ABC Family) new family drama/sitcom series by the author of “Pretty Little Liars”.  This one is about identical twin sisters separated at birth, one wealthy and the other poor.  One finds out she has a twin and….

What Not to Wear (9pm on TLC) Season 10 premiere

Downsized (9pm on WE) Season 2 premiere