Boxee is about to get some SageTV goodness.  Since GoogleTV “stole” away the SageTV team to work on their fledgling GoogleTV the SageTV user group – many of whom tend to lean towards the developer-crowd has been trying to find ways to make the most of the situation.  A group of these developers recently started a project to make a SageTV for Boxee app that will at least help the situation.

Sample Logo pictured above was created by Karl Ricker – one of many possible logos to be used in the final app.

I’ve been following the discussion of this project since July 19th when a thread about making a SageTV for Roku app evolved into this Boxee app discussion.  Two of the big issues with Google’s purchase of SageTV – at least for SageTV owners include:

1. No new licenses – You can’t purchase a new license for SageTV.  This means no new users, and no expanding to additional computers beyond what you already have licenses for.  They did offer free upgrades to the latest version of SageTV if you already owned an older version however.

2. No new extenders – SageTV sold their own awesome SageTV extender/media player devices which was one of the appeals of SageTV.  But the moment Google purchased the company, those extenders were no longer for sale.

One of SageTV’s strengths is it’s DVR functionality.  It would just so happen that one of Boxeee’s weaknesses is the inability to “do DVR.”  In just a matter of days, a fairly large number of developers who have worked on various SageTV 3rd party apps have joined together to build a SageTV for Boxee app.  They even have a proof of concept version of this app available to download!  This boxee app should work on both the Boxee computer software version AND the Boxee Box! 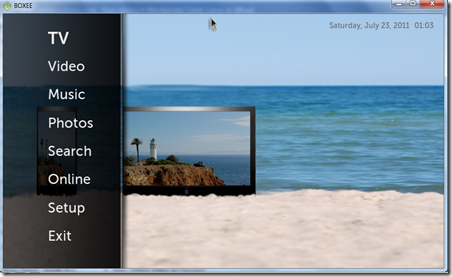 The proof of concept already has the standard SageTV UI which bodes well for getting the awesome 3rd party add-ons (Phoenix and Diamond anyone?) on Boxee.  Some video playback works great already, but the Boxee box is more limited in playback capability compared to the SageTV HD300.  Longer-term they plan/hope to get LiveTV working as well.  It’s not as good as seeing SageTV HD300’s go up for sale again, but it’s pretty good news for most of us using SageTV still.  Plus you get the online video awesomeness of Boxee as well.  This is just one example of how devoted and talented the SageTV community is.  I hope Google recognizes this is part of what they were getting when they purchased SageTV – whether they realized it at first or not!

Recordings Screenshot of next update: 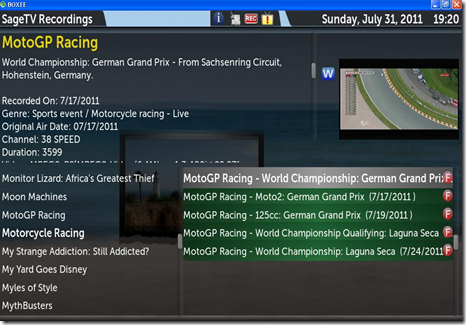 Where to find out more: