Today, RIM announced their new tablet – the PlayBook.  Its thankfully not going to be called the BlackPad and looks pretty nice based on the specs and first looks I’ve seen.  But there are plenty of things going against it.

Blackberry’s new tablet, the PlayBook will run a Cortex A9, 1GHz dual-core CPU with 1 GB of RAM, a 7-inch screen, multitasking (looks kind of like the way the Palm webOS handles app switching), 1080p HDMI video, HDMI port, USB port, an e-reader, full document editing and it pairs with BlackBerry phones.  Oh and yes it has a front and rear HD camera and is only 9.7mm thick!  Yes that mouthful of specifications makes this iPad owner drool just a little bit.

Now for the somewhat negative news depending on how you look at it:

All negatives aside, I’m impressed by the PlayBook from what I’ve seen.  It sure looks like it could be a dream tablet for a media enthusiast.  Check out the video below and let me know what you think: 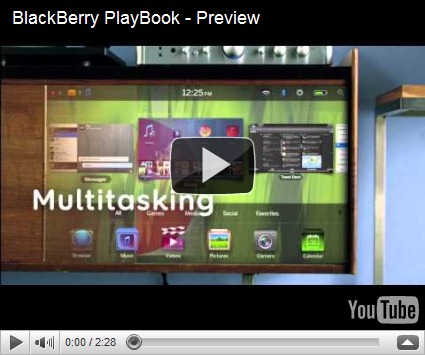