My Kindle Screen is Broken–Now What?

When you’re carrying around a paperback book you can treat it as careful or carelessly as you wish.  Most people would toss it in a backpack with a pile of books and other heavy items without a worry.  If you drop that book, accidentally drop a glass of water on it or most any other bad behavior the worst that could happen is that single book might be partially damaged.  But do that with your eReader or Tablet reader and your risking more of an investment.  That is what happened to my adult daughters Amazon Kindle 2. 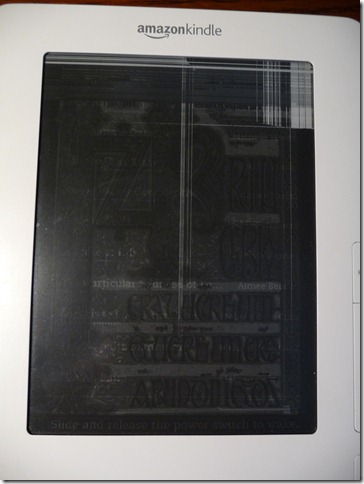 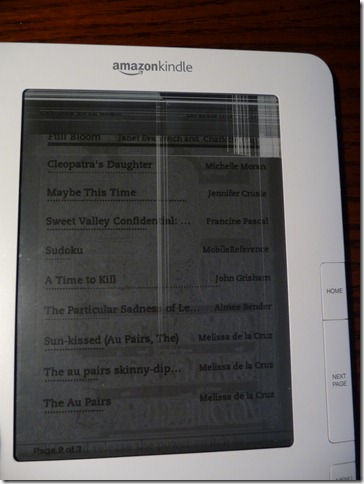 As you look at this photo from the screen you can see the lines on the screen.  Looking at it closely you’ll notice the text is not as dark and after a few moments the text gets even harder to see – mostly unreadable.  We don’t know exactly what happened to this poor eReader, but from the looks of it, the LCD screen had what Amazon calls “impact damage” which is a nice way of saying “the screen got pushed on too much” or “you dropped it.”  If your eReader isn’t too awful old, Amazon will replace it with a refurbished model for free.  My situation today was not quite that good as this is a Kindle 2nd Generation that we purchased the day it was available which means out of manufacturers warranty.  Amazon replaced many that were beyond their 1-year warranty, but they are not going that far back.

I thought about selling it on E-Bay for parts, but first called Amazon support to see what they would offer me..  After clicking “contact me” on the Amazon website, the Customer Service Rep contacted me instantly and a live, native English speaking person was talking with me in a matter of seconds AND they had all of my information ready for the call.  The CSR told me it was beyond the manufacturers warranty, but they would replace the broken Kindle with a refurbished model (same 2nd gen with 3g) for $40 with a 3 month warranty.  I’ll be receiving this new Kindle in 2 days and will mail the broken one back to Amazon within 30 days.

Pretty good customer service compared to most any other company I’ve dealt with.  If I were to sell this refurbished Kindle on E-Bay I could sell it for over $115.  Not a bad return for a Kindle that was very likely abused in the first place.  Then again, it’s pretty difficult to make that much-cheaper paperback so damaged it’s unreadable.