This week’s TV schedule things begin to heat back up with the Fall TV season just getting started.

As you prepare for this new TV season, be sure and check out the GeekTonic 2011 Fall TV Season premieres guide highlight all the new shows and provide a detailed listing of all TV premieres for the Fall and early-winter TV season.  Read on for the GeekTonic weekly TV update highlighting all the new premieres, finales and specials coming up this week. 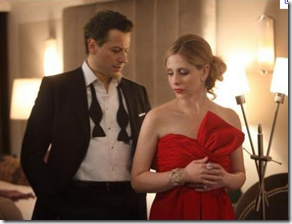 CW brings back Sarah Michelle Gellar in “Ringer” this Tuesday

America Remembers – 9/11 (8pm on PBS) A special documentary commemorating the 10-year anniversary of the September 11 Terrorist attacks with memorial events and personal testimonies.

Rebirth (9pm on Showtime) A documentary about five people whose lives were transformed by the terrorist attacks of September 11, 2001.

In the Flow With Affion Crocket (9:30pm on Fox) Season 1 finale

Entourage (10:35pm on HBO) Season 8 finale which is also the final episode for this series

Rise Up (7pm on ESPN) Season premiere for a new ESPN reality series.  Rise Up tells the story of four communities coming together to renovate their local high school’s athletic facilities.  The inspirational, four-episode series will showcase renovation projects from start to finish and will also focus on giving students advice, training, and tools that they can use to become better athletes.

Ringer (9pm on CW) New drama/mystery series starring Sarah Michelle Gellar.  This one was originally supposed to air on CBS, but was moved to CW at the last moment.  It actually looks better than CW’s standard fare.  For a complete synopsis & preview video head to the CW New Premiere Page at GeekTonic

H8R (8pm on CW) A new reality series about reality series stars.  Yes you read that right.  Mario Lopez hosts this new reality series from CW.  Lisa Gregorisch-Dempsey of Extra is working on a new show that pairs people with the celebrities they hate.  This show lets reality TV’s biggest detractors meet face to face with the stars they loathe.  First up will be Kim Kardashian and Jersy Shore’s Snooki.  For a complete synopsis & preview video head to the CW New Premiere Page at GeekTonic

Scammed (9pm on History) A special documentary/history show with Paul Wilson exploring the many schemes that have plagued unsuspecting people over the past hundreds of years.

Up All Night (10pm on NBC) a new sitcom series starring Christina Applegate.  A couple experience the fun of a new baby.  The mom is a professional woman, the dad gets to take care of the baby at home.  For a complete synopsis & preview video head to the NBC New Premiere Page at GeekTonic

Angels Among Us (9pm on CMT) New reality series – this first episode commemorates the 10-year anniversary of 9/11.

The Secret Circle (9pm on CW) A new drama/fantasy series for the CW set.  After her mother dies in a mysterious accident, Cassie moves to a small town to live with her grandmother; after a series of strange and dangerous events, Cassie’s new friends reveal a secret.  For a complete synopsis & preview video head to the CW New Premiere Page at GeekTonic

NFL Turning Point (10pm on Versus) New sports-based series that examines in-depth the crucial moments from each game.

Need to Know (9:30pm on PBS) a news weekly hosted by, Jon Meacham, Editor of Newsweek. He will speak about current public affairs.

Weathering Disaster (8pm on The Weather Channel) a new weather-based series.  First episode is about a tornado in Oklahoma

How I Met Your Mother (8pm on ABC) Season 7 premiere

Dancing With The Stars (8pm on ABC) Season 13 premiere

Two and a Half Men (9pm on CBS) Season 9 premiere

The Playboy Club (10pm on NBC) New period drama centered around the Playboy Club.   Club regular Nick Dalton helps a new bunny out of a dangerous situation; the club's general manager tries to keep the mob from interfering with his business.  For a complete synopsis & preview video head to the NBC New Premiere Page at GeekTonic

New Girl (9pm on Fox) New sitcom series starring Zooey Deschanel.    After a sudden breakup with her long-term boyfriend, Jess (Deschanel) moves in with three single guys; Jess' friends try to help her start dating again.  For a complete synopsis & preview video head to the Fox New Premiere Page at GeekTonic  Based on the preview trailer, this one looks good although I saw a short clip from the premiere episode and I’m not as sure.  I still plan to record it to see if it’s really funny or if the trailer just picked out all the funny parts to show us.

Unforgettable (10pm on CBS) New crime drama for CBS.  A murder reunites former detective Carrie Wells with her ex-boyfriend and colleague; Carrie must use her rare ability (photographic memory) to help solve the case.  For a complete synopsis & preview video head to the CBS New Premiere Page at GeekTonic